Which game are you more excited for? Or is there a third title I should be looking for?

I spent a lot of time, recently, reliving some glory days. Thanks to GoG.com I have been reminiscing about the modern-classics, like the original Unreal Tournament from 1999. A new game looks like it might bring back some of the simple but fast paced action that made the first UT such a smash, while none of the sequels have quite lived up to it. CellFactor: Psychokinetic Wars will blend the fast paced gritty action of UT with some of the more popular magic-like features of the megaflop Shadowrun. All this is going to be delivered through a downloadable game (Xbox Live Arcade and the Playstation Store) at an affordable price.

An addition to this game, as far back as 2007, people were spotting “Quake III Arena” being listed as an Xbox 360 title on the ESRB’s website, and was even announced by id Software. It looks like it might finally be a reality, coming before the end of 2009. Coupled, at the time, with the announcement of “Quake Zero” (now renamed “Quake Live”) it seems entirely possible like there may be some form of cross-platform play coming to this title.

I’m very excited to check out both of these games, they each look very cool. Are there any other up and coming titles I’m overlooking? 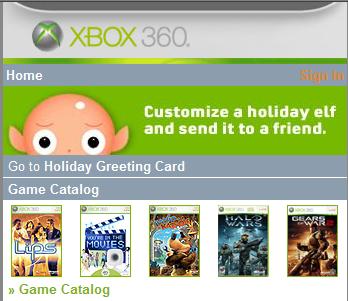 In a recent twitter-quest, I asked everyone if there was anything like an Xbox Live program for my recently purchased Windows Mobile phone. I gained exactly zero responses. Little did I know that there was a little pot of Gold waiting to be discovered.

The other day I posted about some Halo 3 and Fable 2 wallappers and ringtones. Well, what if I told you there were more? Not only more, but for other games? Games like Gears of War 2, Too Human, and even Madden 09? What if I told you there were mobile games, exclusive to your cell phones? Ways to check and respond to your Xbox Live messages, all from the palm of your hand?

Well, there is. Bookmark the following, and you will be set!

Xbox.mobi – a completely mobile designed site, streamlined for phone browsers, offering all kinds of exclusive content from wall papers to sound effects.
Xbox.com/en-US/wap/ – Xbox.com (America)’s WAP site, which offers you access to much of Xbox.com’s contents, including your friends list and more.
Xbox Live Message center (again USA only link provided, though it may work for others). This link is not truly designed for mobile phones, however it takes you straight to your Xbox Live Inbox, and as long as your browser is powerful enough, you can read and compose new messages!

While I don’t plan on changing the content of the site to a new mobile phone fansite, I just wanted to offer a few helpful links to everyone. I also intend to check out the mobile phone browser SkyFire – I will let everyone know how useful it turns out being (worth it or not!?). Don’t forget to do your part to help spread the word about Xbox.mobi – here’s hoping it keeps growing, as Microsoft keeps their promise of LIVE EVERYWHERE!

As the United States finally gets a chance to play The Club demo, WinBreak has finally obtained our demo version of Turok. We enjoyed this (very) brief look at the game, and here are our first impressions.

Let’s begin, as Lewis Carroll had said, at the beginning. The game gives you a paragraph of back story, then drops you into a cave. Essentially as meaningful as the plot I recall from the Nintendo 64 version of the game, putting you into a comic book, or a dream, or a bolt of lightning… okay, I admit, I’ve forgotten, over the years. Still, here in the demo, you get essentially nothing but game play – let’s hope the retail game is a little more interested in making you can and uderstand why you’re fighting both humans and dinosaurs.

The game has interesting play mechanics. It is, of course, the traditional first person shooter… but a bow and arrow can make you a deadly assassin. This powerful yet silent weapon is certainly to be feared, as you rampage through this level of caves and jungle, killing man and animal alike. Something that I noticed and was quite impressed by was how herbivores had a tendancy to leave you alone, unless provoked, and even the most docile animals will attack you if you destroy their eggs. Quaint details.

The weapons I have quickly gotten my hands on so far include a shotgun with an alternate fire of shooting flares, and an assault rifle of sorts, which includes a silencer. These can be dual wielded and assigned to either hand, for dominant-finger-trigger-domination. Fend off reptiles with the rapid-fire shotgun while long-shooting those mood-goggle wearing bad guys. Whoever they are.

The AI can be a little annoying. Wandering around, useless, then all of the sudden snapping to attention, and leading the way, like they’ve known where the exit was the whole time, and were really just kidding when they said they were affraid of the dark. Then, you’ll get to a point, and they’ll stop like the invisible wall infront of them just gave them a concussion, and it will be your turn to lead the way. But you have to get a good distance ahead before they’ll start following again – if you turn around, they might as well stare at you like a cocker spaniel. They won’t start walking again until you cross another invisible line. It’s a tad annoying, and very unrealistic – they should’ve called up Microsoft and asked about Gears of War, and believable squad AI.

The already well known Unreal 3 engine does not disappoint. Graphics are stunning, though, at times, a little lack luster. Creeping through grass, you get to watch blades and branches bend down infront of you. But they’re still very sprite based, and look the same from any angle. The textures on most objects are still amazing, but I think we can thank Epic studios for that. The sounds are impressive, and quite helpful… you can tell when an enemy soldier is splashing through the water. You will know enough to stand still behind the rock you’re using for cover. The voice acting (a pet peeve of mine) is neither awful nor superb, which already makes it far better than most games I’ve played.

So far, the demo seems kind of ho-hum, so-so. Like it’s been done before. But let me tell you where this game shines. Two points. First, melee combat. Creep up behind someone and do a silent kill with a knife. It’s always a good time! Give it up for… Native American Army Space Marine Combat Training! Or something. Whatever. It doesn’t matter. I don’t need a story line, or cheap weapons, or a super fast shotgun… as long as I can slit the throats of every dinosaur that tries to sneak up on me. A quick dodge and a tap of the right trigger, BAM! A third person view of me, doing in a creature three times my size, with ease. It never gets old! And I can’t wait for others to get their hands on my game, so they can understand my “no dino too cute” policy. Knife’em all!

Second, the game can, at times, give you a genuine sense of helplessness and panic. While the caves never made me feel claustrophobic (more just lost in the dark), I was actually more impressed with the flood of raptors that happened at one point. I was in a large circular clearing in the jungle. The problem with that large clearing? Dinosaurs could come from any angle. And they did. After killing them all off, I still sat in the center, pivoting, and spinning, unsure if more would come out of the tall grass. Was that a gentle breeze, or a scaled killing machine? You turn in circles, wondering what will come next, and a genine sense of fear may rush over you. It’s quite fun!

So, there’s a little of what to expect, if the game does come to the U.S. Hopefully you get a chance to experience it before it launches, though. If nothing else, the exit screen of the game says you should be able to get busy decimating dinosaurs as early as February 5th.