In a conversation with some friends a few YEARS ago, I believe not only did I prove this was happening, but I figured out how to prevent it. 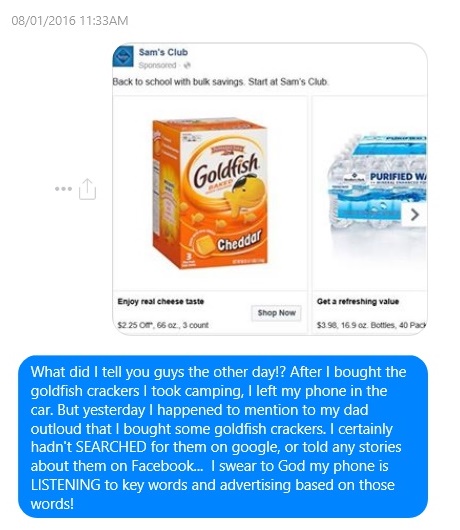 
When I tried to disable this overlay, I was alerted that I had to disable permission to the Microphone before I could disable this overlay. Luckily, with Android 6.0 “Marshmallow” and above, users have more granular control over their individual permissions, rather than just granting an app whatever it wants. So I disabled the microphone permission, then disabled the overlay, and I’ve never again had an incident where I felt like Facebook is “listening” to me.


Let me know if that helps, I hope it does! If not, check back next week. Notice how the Goldfish Crackers advertisement above that was a screenshot from Facebook was actually an ad from Sam’s Club? Sam’s Club and Walmart are connected companies, and NEXT week, I plan to have an article discussing how Walmart Tracks you as a customer. See you next week!