I would be down with the “N Cloud,” wouldn’t you? Okay, I know, I just made the term up – but the answer is obviously a resounding “yes.” Let me explain why I, and just about everyone I know, would jump at the opportunity to have Nintendo provide this service; when I say “just about everyone” – I’m even including Nintendo, themselves. Consider this an open letter to Nintendo: my proposal for the “N Cloud” service.

This console would be “always online” and designed to play the classics. It shouldn’t need to “stream” the games’ visuals, in the same way that the OnLive service does. But the games, and thus, your save states, could reside in the cloud, and be downloaded as needed. The service should offer the entire back catalog of Nintendo games. And I mean entire. Some games will take a while to come, because they haven’t been officially made available as online content before. But if it’s easy enough for a pirate on the Internet to get a ROM of the game, Nintendo has little to no excuse to not be making money from the title.

Nintendo could offer a select few games for free with a monthly membership – games that you’ll always have access to for just a base fee. Then they could rotate additional “free games of the month” throughout the year. You could unlock permanent access to a game for a one time fee of about $10. Nintendo not only has a huge catalog of first party games people know, love, and remember, but they should be able to easily get their lawyers to find a loophole allowing them to release nearly every single Nintendo, Super Nintendo, and Nintendo 64 game that ever existed. Remember, when it came to gaming’s earliest days, publishers didn’t just make games for the console, but the games were actually Licensed by Nintendo of America to appear on the console. They should be able to have the rights to a huge number of games.

The benefit to having your save in the cloud is obvious: how many times have you gotten the 101% in Donkey Kong Country, or all 120 stars in Super Mario 64 or unlocked all of the tracks in Mario Kart 64? Don’t lie. If you’re reading this article? More than twice. For each of those things. So why not have your progress always available, along with certain newer benefits that emulator-gamers have gotten used to, like Save States (save your game at any instant), or the ability to adjust the game’s speed.

The hardware would be inexpensive (it could be done on the Wii U, if they really wanted to). As a stand alone console, a follow-up to the Wii U, it might be wise to have a low-cost, high-profit margin option available to consumers, to rebuild the brand. Gamers have clammored for a service like this for years, and have taken to doing it illegally. Why it is still taking this long for Nintendo (and many other companies) to trickle out their “classics” line ups just a few at a time is beyond me. Where there’s a black-market, there’s a market waiting to be tapped. 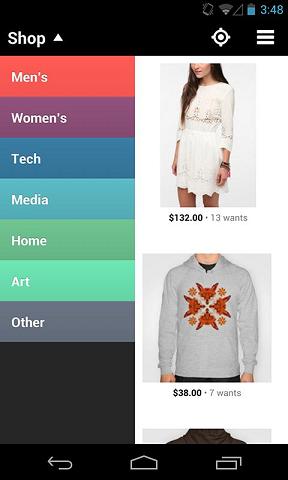 Svpply.com calls itself “a curated collection of the world’s best products and stores.” A division of eBay, Inc., Svpply strives to have the same “pinterest-like” effect on its members, while specifically targetting shoppers. Want clothing? Just click and view popular items. Need something to satisfy your latest ’bout of techno-lust? Here is a selection of tablets. Looking to impress the unimpressible hipster next door? Someone on Etsy is selling their Polaroid camera collection!

The more “wants” an item gets, the faster it ranks up and shows up higher in the list of curated items, and the more you use Svpply the more it learns your tastes and preferences as well. And what better way to use it a lot than by downloading the Svpply app for Android.

It’s an attractive app and in my experience was very smooth. It has a clean interface and doesn’t throw too much at you at one time. The Svpply app for Android isn’t a normal choice for me, but I wanted to make sure others knew about it.

I was thinking, the other day, about how a parent tries to get kids in to video games. What started me on this was actually quite the opposite: I had seen a photograph of a woman’s hand holding a Playstation controller – but in that awkward way that someone who has never played a video game before holds controllers… one thumb on the buttons, the left hand doing nothing at all, no where near the D-Pad or Analog stick. And that got me thinking: how did I learn to play games?

There are kids who are about to get their driver’s license who obviously didn’t grow up with the Atari and the Nintendo. Their brains fascinate me – they must me more advanced than I will ever be. I graduated from one face button, to four, to shoulder buttons and triggers, to Analog Sticks. And if I were going to take someone who had NEVER played a game before, I would teach them the same way I had learned.

I would be fascinated to watch someone jump right in to gaming and have the Xbox 360 be their first console, but I have no kids of my own, and I’ve grown up gaming, so I have no idea how to wrap my head around that. How could you pick up a controller that has a total of 9 digital buttons, two analog sticks, two analog triggers, and a directional pad with somewhere between 4 and 24 directional sensors and know what to do? The complexities of video games should be gradually introduced. This being my firm belief, I have developed a training regimen to get someone comfortable with a game controller.

It begins where many people began: the Atari 2600. I would begin with Pac-Man. It’s a sad excuse for an arcade-port, it’s true, but the game involves no button presses, you merely need to master the joystick. We then move on to using the button by going to Defender. For extra credit, try Asteroids to reinforce on the player the concept of “screen warping” which they should have experienced in Pac-Man.

Our user then graduates to the Nintendo Entertainment System. Now we have a slightly more complex controller – to get used to the multiple buttons, I would use a simple game that easily demonstrates the difference, such as Excite Bike, before moving on to to something else. I would save Super Mario Bros. until the user is familiar with the controller. Thinking about it as a pack-in game fascinates me, because it does have fairly advanced controls. The user needs to be able to handle simultaneous button presses, such as holding the “B” button to run, while moving in the direction they want and pressing “A” to jump, in order to cross large pits. It is critical to future game play to learn the complexities of multiple simultaneous button presses.

The super Nintendo may have introduced more buttons, but the gameplay mechanics didn’t change until the Nintendo 64 was released and introduced the analog stick to the main stream. You could use a Saturn, here, but… why would you? Super Mario 64 is a great tutorial on the Analog stick and I would stick with this before sending someone off to the Sonic Adventure games on the Dreamcast – the control always seemed a little less rigid in Super Mario 64.

Now it’s time to move up to the Xbox, Xbox 360, PS2, or PS3. I’d jump right to the 360, but it is my console of choice. I missed out on the PS2 era, never owning one and opting for PC gaming at the time. So although I’m sure there are excellent games to get the user familiar with multiple analog sticks, I would go right up to the Xbox 360. And the game that really helped me get comfortable with dual-analog sticks was the twin stick shooter Geometry Wars Evolved. Once you have that down, work in to the player’s most likely favorite genre… racing games, FPS, 3rd person action, RPG – or some hybrid titles like Skyrim or Bioshock.

Successful grooming of a new gamer can take time and patience. Players jumping right in to more modern consoles and controllers can skip everything I’ve mentioned here, but I would advise finding games that will slowly familiarize the new player with a controller. They’re not likely to dive head first into Gears of War with much luck, but you could use a Sonic the Hedgehog game from the arcade (or a clone like Fancy Pants Adventures), and on to games which introduce more complex game mechanics, such as Braid.

There are lots of ways to get someone in to gaming who hasn’t been onboard before – but if the controller is the most overwhelming obstacle, at least there are some options to ramp up to the more modern controllers! 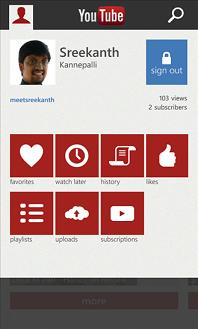 Everybody seemed pretty excited about this news, so I figured, why not make it my app pick of the week? The official YouTube app is back on Windows Phone!

Now, that doesn’t make it easy to find, however, because Microsoft allows multiple apps to have the same name. To make it worse, nearly everyone who makes their own YouTube app uses the same logo. But luckily, I have the URL you need. You can get the official YouTube app from Microsoft on the Windows Phone Marketplace.

After a long, drawn out battle with Google, the app is back on Windows Phone, and allows great Windows Phone features like pinning of Channels or Videos as Live Tiles. The app also includes full channel management features, Kid’s Corner, and even the ability to upload videos directly from your phone and share them to social networks. Go download the official YouTube for Windows Phone app, and enjoy!