Let me explain… my website recently received a search query asking how to remove a virus from a Nintendo Wii U. I did some digging and see that people have pretty much been asking questions about Wii U viruses since the system launched. I was able to put the pieces together and figure out what’s going on!


People state that they are receiving messages from Nintendo that their machine is infected. What you have received is a FAKE message. It may have either appeared in your web browser, some thing similar to this image: 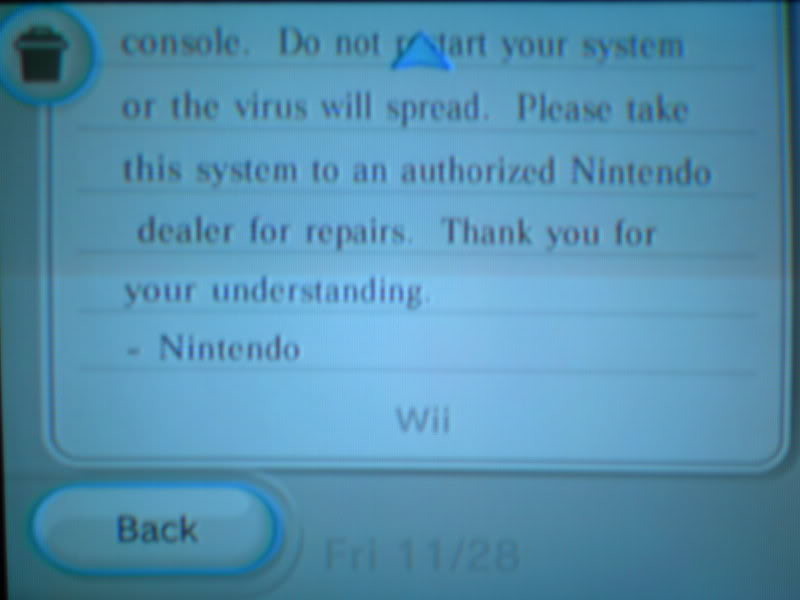 
Think about it, when did you see the “virus” alert? Only when you were in the browser, nowhere else on the machine? That’s just because it loaded a page with a fake “alert” trying to make you think that your computer was infected. Or even if you received a message – do you think that if Nintendo wanted to alert you that your system was infected they would do it via the normal messaging system? Highly unlikely. That would be like your computer’s antivirus not alerting you, just sending you an email. I can even provide some more technical reasoning, below, but before I get to that, why not give you your own way to find peace of mind:


If you’re still convinced that you do have a problem, don’t take my word for it: check out Nintendo’s online support documents. A search for the word “virus” didn’t return a single result – but to ultimately put your mind at ease, you can contact support as well, and ask them about it.


It is generally accepted that there are no viruses on the Wii or Wii U because not enough is known about the Wii and Wii U architecture to exploit it with some kind of virus (in short, “Wii’s can’t run Windows “.exe” files). Even if you visit a web page that would infect your regular computer, it can’t infect the Wii U because they are designed to behave completely differently. While it is true that the same things that allow for homebrew applications to be installed on it, or pirated games downloaded to the old Wii are of course things that could potentially be used for evil, those communities are filled with people trying to help each other, not hurt each other. We should never say it’s completely impossible to get a virus, but it is just completely undocumented. There is no evidence of an actual virus being installed on one of these game consoles – only evidence of a message showing up on people’s screens (and almost only EVER in the Browser). That is not cause enough for concern. So relax and get back to your games!

Update 3: In May of 2019 Microsoft released a patch for x86 versions of Windows XP and the 32 and 64-bit versions of Server 2003. KB4500705 protects against remote code execution. The patches have been uploaded locally and are hosted further down the page.

Update 2: Although I have “WannaCry / WannaCrypt” specific patches below, in June of 2017 Microsoft released an additional collection of patches for Windows XP with SP3, Windows XP 64-bit with SP2, and Windows Server 2003. I have not (yet) mirrored these updates locally, but I think it is important to link readers to these critical security patches. Microsoft specifically noted that these updates do not check Windows Genuine Advantage status.

As we well know, Microsoft has stopped support for Windows XP – so much so that you can no longer connect to Windows Update and download updates for Windows XP computers. If for some maniacal reason you need to run a Windows XP computer, I would hope you at least get it secured as best you can with the updates. How you ask? I have compiled all of the updates using the WSUSOffline.net tool, and assembled them here END_OF_DOCUMENT_TOKEN_TO_BE_REPLACED

Update: Almost 2 years after I wrote this article, it remains one of the most popular on the website, so I put together a brief video explaining what is written below, for the more visual learners out there. Enjoy! 🙂

When you’re initially setting up a router, one of the things you might skip over is the DHCP Lease Time setting. It’s typically measured in minutes, but how long should it be set for? What are the advantages or disadvantages of longer or shorter lease times?

In the average home router, your lease time is set for about 24 hours (1440 minutes). Some people set 8 hour leases, some prefer up to a week! The DHCP lease is how long a device reserves an IP address on your network. The DHCP reservation is the key. The device can leave the network, but the reservation can still be in place, depending on how long you set the lease time.

It’s a little confusing, so let’s use a few real world examples END_OF_DOCUMENT_TOKEN_TO_BE_REPLACED


Just in case they change their website and my link is dead, you can try to search the web for ZModo’s latest version – but if it is needed, the current version as of the time of publication on this article, ZPlayer_1.0.15.0_Setup.exe, is mirrored here on our website.