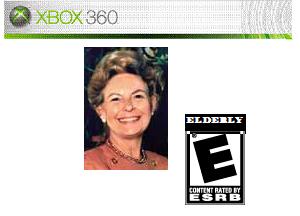 Digg This!
[Update 1]
I’m normally more respectful of people, but I really am tired of this debate – and the fact that it comes from people who have no clue what they’re talking about, no business talking about it, and most importantly, no reason to be drudging up and instigating aimless discussion about the topic!

At 1:00 this morning (certainly five hours after she was already asleep), angry generation gapped author Phyllis Schlafly (do what you do, internet) posted an editorial stating that video games and their designers should not be given the same privileges as the rest of America. Says Schlafly, “It does not require a leap in imagination to see the risk of immature players transferring violent role-playing to real life.“

So says the media. I’ve never seen someone convicted of murder insist video games caused them to act that way. Sure, after a school shooting, they find video games on their computer, and say that must have been the culprit. I encourage you to walk in to ANY home with someone under 30 living under the roof and not find video games. They are a part of our culture, as was already discussed this week.

And why shouldn’t these video game designers, and game players be granted the same rights as anyone else? Are we not promised freedom of expression? If I chose to express myself by relieving stress on a virtual foe, while simultaneously engaging in a compelling storyline, enjoying breathtaking imagery, and responding on a very human level to superb voice acting talent is that coming from Hollywood – is that not far more constructive than sitting in front of my television and tuning in to see if my favorite singer is America’s favorite singer?

I listen to NPR on my drives to and from work, I keep up on world events, but when I choose to sit down with a piece of interactive media, why am I suddenly looked at as though I may become a psychopath in the near future? Why is it that adult film theaters still exist, but what I do in my living room is so taboo? Nobody is putting a $400 system and a $60 game in the hands of young children apart from their parents. The rating is clearly marked on the front of every game. It has nothing to do with the complexity of the system, and how hard it is to pay attention to video games. If you can take the time to hand your kid $60, you should take the time to see if the game is rated 6 and up, 13 and up, or 17 and up. You can look at the back of a movie at a store and say “it’s rated R, you can’t have it.” Why can’t you look at the front and say “it’s rated M, you can’t have it.”

At 13 I could not play Mortal Kombat, my mother did not permit it in our home. That was before the days of the rating system, and she was able to keep me away from it. Sure I would sneak off to a friend’s house and play a few minutes at a time – but it never entered our household until I was much older. A rating system shouldn’t be necessary, but it’s there to help. If one does not use it, the industry is not to blame.

For God’s sake, Schlafly, talk to your grandchildren. I’ll guarantee you they’ve spent a weekend shooting aliens, zombies, and zombie aliens. The article mentions one game in particular, “‘Postal 2: Apocalypse Weekend,’ boasts it will enable the user ‘to hack your enemies to meaty bits!'” I’ve played that game, and while it does have very mature content, the violence is actually rather tame. There are a host of weapons available to a player, but as far as the meaty bits? None! The game has no form of dismemberment beyond decapitation. Gruesome? Perchance, but there is a rating system in place, which the game fully adheres to, and even posts a warning before the game starts that the content is not suitable for children.

Yes, we have a video game rating system in the United States. It works the same way as the film ratings. Nobody gets upset when a rated R movie appears in a theater with sexual content, nudity, and graphic violence. And any given theater is accessible to hundreds of people at a time, for as little as a few dollars. Video games are required to be played within your own home, and anyone with a console knows the games are not cheap. But still, though we are forced to keep our passion and hobbies hidden behind closed doors like sickening degenerates, it’s never good enough, and a person who found the introduction of television to the home detrimental to family life is the same kind of person who is going find fault in any form of creative expression unfamiliar to them.

Jazz music, Beatnik Poetry, Rock Music, Heavy Metal, and Video Games. Someone always has to have something to hate, but really, people? Isn’t it about time we move on from video games start condemning the Easy Bake Oven for creating a generation of sugar addicts?