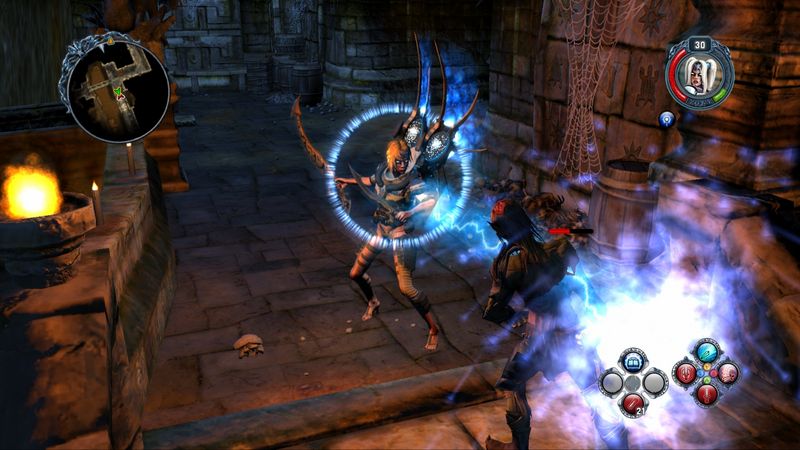 I was recently sent a copy of Sacred 2: Fallen Angel for review. Let me preface this by saying I have not completed the full game. I know, some people think that you are not qualified to review a game until you’ve logged 50+ hours in the game. Well, until someone starts paying me $30 an hour to do this, this “micro review” will have to suffice!

The game was described by others as very much like the classic PC game “Diablo.” After hearing this for the first time, I was already intrigued. I was never great at RPG titles, but there was something about the point and click adventure that was Diablo on the PC that I sincerely enjoyed, even if I was terrible at it.

Sacred 2 does live up to a lot of that hype, but thankfully, there wasn’t much hype beyond that to drive your expectations. If it did, it would have fallen short on many of them.

Again, I have not played through the majority of the game, yet. So I cannot comment too much on the story line or character evolution. But I have played enough to be able to comment a great deal on the game as a whole. First off, my personal nitpick: the voice acting. Anyone who has ever read any of my reviews and previews in the past should know that this is something I pay a great deal of attention to. Unfortunately, “Ascaron Entertainment GmbH” did not. The actors may as well be the interns who didn’t go out for coffee that morning. Okay, I’m over it. Bad voice acting is an unfortunate part of my life, since I enjoy budget games and B Movies.

Back to the campaign mode. I did not play the original Sacred on the PC, and I believe most players of Sacred 2 will be in the same boat. Not something to worry about, though, as the game just sort of drops you in to whatever the story is that’s going on. From the official storyline introduction, you can tell that you are supposed to be trying to get a hold of “T-Energy.” Unfortunately, the game’s poor voice acting and very straight forward objective based tasks have failed to suck me in to the game. I don’t care what’s going on, I just go from city “A” to city “B” and kill everything in between.

Graphically, the game is nothing special. Even the light and particle effects are far behind what I thought they should. Your character models are nothing special, your typical RPG busty blonde, with her naughty pig tails, trying to save the universe with her steel thong of justice.

Unfortunately, even though you are told to create your own character, you are limited to 4 character classes, already determined male or female, and a small (and I mean less than 10) selection of pre-defined faces, skin tones, and hair styles. It’s very limiting, but graphically, I don’t see any reason not to import your Xbox 360 Avatar, at least they are more customizable.

Where this game makes up for some bad acting and poor graphics is in scale. It’s quite possibly the largest console RPG ever. FallOut 3 is huge… Oblivion was massive. But the scale of this game feels absolutely gigantic. Pressing select reveals the map to the player immediately, and you realize just how small of a role you are playing in this universe, and it’s up to you to become someone worth paying attention to. The map is huge, and traversing is made easier as you progress through the game, as you are able to activate teleporters, so that you can hop from any point on a map to the center of some of the larger cities.

What about a shining and totally redeeming quality? The multiplayer (4-player Co-Op) aspect of this game is absolutely incredible. The game feels a bit like Crackdown in the multiplayer aspect, you can hop in and out of games at will, and play online, allowing others to join as you go. You can play in two separate parts of the world doing absolutely nothing together, or you can party up and take on a larger enemy, or a cave/dungeon, etc…

This is where the game really came to life for me. I was able to hop in to other players’ games, help them out, get a few great items as they were dropped by the enemies. The hack’n’slash game play, where you just go from one enemy to the next, waiting to see what they’re going to drop. You gather lots of gold, take items to blacksmiths, get your items fixed up and leveled up – but the game really does come together very well. Controls, on the Xbox 360, had me worried. But they were very logical and easy to get used to, switching between a few equipped weapons, and even defensive weapons, and even the ability to define great spell casting and weapon based combos.

I don’t like to do numerical scores on games, but let me summarize for you all:

So, in the end, I can’t say for you if the game is worth $60. In my book, it isn’t. But the classic gameplay style and my anxiousness to get my friends in to a 4-player hack’n’slash adventure the likes of which I haven’t experienced since the earlier part of the decade… these are the things that make me recommend the game to the right kind of people – but only you know who you are. If you’re “just curious” you should probably wait until the game drops in price, because I do see it as inevitable, as the game doesn’t quite stack up to many other RPG’s out there today.