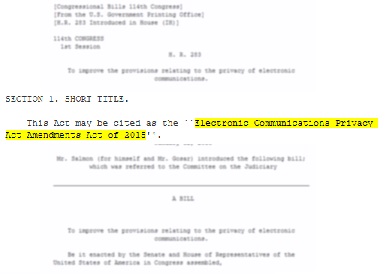 Recently, my sister, a Bar-certified lawyer in the state of California, asked me a great question with regards to all of the recent talk about email privacy. She noted that the article says that, if these amendments take hold, that the government is supposed to notify you within 3-business days that they had snooped in your email. But she wondered, what constituted notification? This brought several other questions to my mind, so I did some digging. END_OF_DOCUMENT_TOKEN_TO_BE_REPLACED 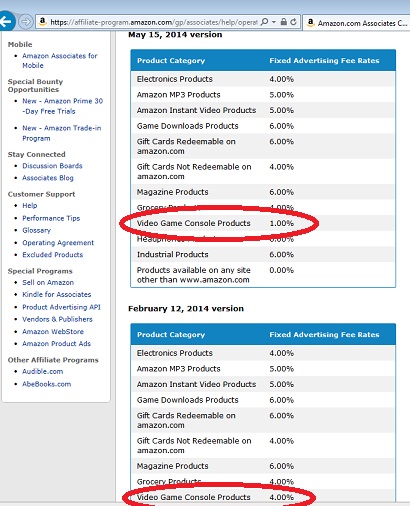 According to Amazon.com’s new associates agreement, changes are coming, effective next week, May 15th 2014. The people affected the most? People just like me. If you blog about video games and want to earn a living through advertising, it’s time to look somewhere else. Amazon has slashed their already lowest Fixed Advertising Fee Rates on “Video Game Console Products” from 4% to a meager 1%. Clearly, video game bloggers with successful ad models were a threat to Amazon’s success. (That, to be abundantly clear, was sarcasm).

The painful thing to note is that nothing else has changed in their Fixed Advertising Fee Rates. Associates for all other products don’t see a fee-change, but it seems obvious to me that video game bloggers have been able to make a dent in Amazon.com’s income by successfully alerting people to bargains they want to take advantage of via Amazon.com and linking them to the site. With literally 25% of the incentive compared to before, how many bloggers are going to continue plastering Amazon links on their website? I certainly won’t actively work as hard to embed a couple of referral links into an article anymore, and I hope more bloggers are onboard with me. I currently have a side-bar ad for Amazon, which will be gone with the site’s next re-design.

If there are enough sales happening that Amazon.com wants to cut the amount of money they pay out, that means there must be a lot of successful referral linking. Would you rather pay out that 4%, or simply not have any of those sales? To drop an Amazon.com Associate’s share to 1%, while all other products remain 4% or higher is down right insulting, and I hope to see a new revenue-sharing-savvy online retailer step up to take their place, soon.

The US Government recently announced their own universal user ID service, which would basically prevent the need for multiple logins. Twitter, Facebook, your email, any site you comment on from FoxNews.com to Reddit, they all require some kind of credentials. Would that make your life easy enough that you would be willing to essentially let someone else in on everything you read and write? Most likely not. Not to worry, I don’t expect to be as widely adopted as they hope. Services like Disqus and LiveFyre (the comment system on this blog) have tried to solve the issue in the past, but nobody has strictly shown true market dominance.

So if it isn’t just convenience, what about internet access? What would it take? Many people have understood and not had a problem with Google scanning their emails as long as their GMail is free. Until recently, that is. END_OF_DOCUMENT_TOKEN_TO_BE_REPLACED