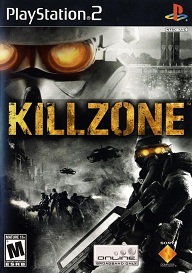 I’ve got some kind of OCD when it comes to series. If it’s music, I prefer to collect entire discographies and rare albums. When I was in to trading cards, I had several complete series in my collections. If it’s a movie, I’ll buy the boxed set! Games are rarely different. I want to know about a game, it’s history, it’s characters, it’s story. I had no idea that picking up the original Killzone for PS2 was going to be such a terrible decision.

I won’t waste any time with a long “review” of this game, since not many people are going to care. Graphically, the game could have larned a lot from Goldeneye 007 on the Nintendo 64. The game used very low resolution textures that were very grainy, some characters looked down right polka-dotted in an attempt to optomize graphical memory. The most visually impressive thing in the game was how many people were displayedon the screen at one time. When the Helghast began storming you, true, they would come in waves of 4-8, but for the time it was a technical feat! Unreal Engine 3 might allow hundreds to thousands of characters on screen at one time, but I was admittedly impressed with this feature.

That’s where it ends, though. The sound effects were terrible, the voice acting was a joke. Even the banter in-game got old in the first mission. I hoped that in later levels, the game would pull from other sound libraries, but it’s more annoying than Left For Dead players anouncing that they’re reloading… again.

The story hasn’t been bad, so far, but the volume of levels is something I never thought I would complain about in my life. I love single plaer campaigns. But this game feels so much like torture, it’s hard to go on. I have not completed the game, and I don’t know that I will. The level design is the most painful thing about the game. The checkpoints are in odd, distant places. If you die, you could end up replaying a 20 minute chunk of the game. Characters repeatedly say “we should go that way” – but the AI never takes point, and the Heads Up Display in the game has absoluely no navigational markers. I spent ten minutes trying to figure out where to go, before giving up on the game for the night. The next day, I realized I was trying to go the correct way all along, but some disc error had prevented me from continuing through the level!

Killzone 2 is an award winning title, and when I get my hands on it, it had better not let me down. I had heard it was a mediocre sequel to a mediocre shooter. But in m experience with Killzone on the PS2, even mediocre will be a step in the right direction!