Windows 10 has a convenient feature which allows you to specify your IP address depending on the wireless network you join – making it far easier to bounce around between multiple offices, work locations, coffee shops, and home. But rather than the standard “Subnet Mask” option we’re all used to seeing, it asks users to fill in their Subnet Prefix Length. What the heck should that number be!? 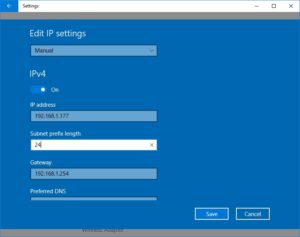 The short answer: Probably 24. That is the same as typing 255.255.255.0 in the old subnet mask field. If you traditionally typed another number in your Subnet Mask, look at the chart below and use the CIDR Prefix for what you’re familiar with typing!

EDIT: I made a video about this that hopefully you’ll be able to absorb MUCH more quickly, and hopefully the visual demonstrations will make more sense!

But why? The long answer: To understand this, you need to first understand subnet masks in general. A subnet mask is really only used to help identify the CLASS of an IP address. It is broken in to four bytes (x.x.x.x) called “octets” (why? Because there are 8 bits in 1 byte. 8 = Octo). The most common example is a class “C” network: 255.255.255.0. In this example only the last byte / octet (the “0” in the subnet mask) can be changed on your current network. This gives you 254 usable addresses (1-255). If you have a class B network, you could use subnet mask 255.255.0.0 (meaning that either of the zeroes could be any combination of numbers from 1-255). Suddenly, you now have 65,534 available IP addresses. This is all done to ensure your devices only talk to the other devices you intend for them to talk to and you don’t accidentally interfere with other people’s nearby networks (routers enforce these rules that don’t allow cross talk between other networks, but this post is running long enough, we won’t get in to all of that).

So, that’s SUBNET MASKS. But we still haven’t clarified just what is a prefix?

This is an extremely complicated concept and while many people are experts with Server Administration and Active Directory Roles and many other things, this one is heavily math driven and took me a long, long time to wrap my head around. Don’t feel bad if it takes you a while to really get the hang of, but I hope I was able to do a reasonable job of breaking it down for you!