I was recently going back and replaying the old Half-Life for the purposes of making a YouTube video about it’s story line, and I noticed some peculiar things about how the story was told. It seemed wildly unique, and I couldn’t quite put my finger on why. I reached out, completely cold, to Half-Life’s writer, Marc Laidlaw. While he admitted that just about everything that could be said about Half-Life has been said, he was kind enough to answer a few of my questions… so let’s dive in and see what he said!

Nu: In the instruction manual for the original Half-Life, Gordon’s offer of employment letter from Black Mesa is shown. What made you decide to take this approach, rather than an narrative approach similar to the manual for something like Doom?

ML: It was just a throw-away to provide atmosphere, and I assumed that most people would never read it. But I’d typed a lot of letters like that as a secretary/administrative assistant, and they were much on my mind. So it was just for fun. I did not want to have anything to do with the instructional part of the manual.

Nu: It’s fairly widely known that one of Gordon Freeman’s prototype designs was a character referred to as “Ivan the Space Biker.” When you came on the team, were you ever under any pressure to write a story based on that character? Was there already an “experiment gone awry” story in place, or did Gordon the respectable and bespectacled scientist we all know and love evolve out of your writing? 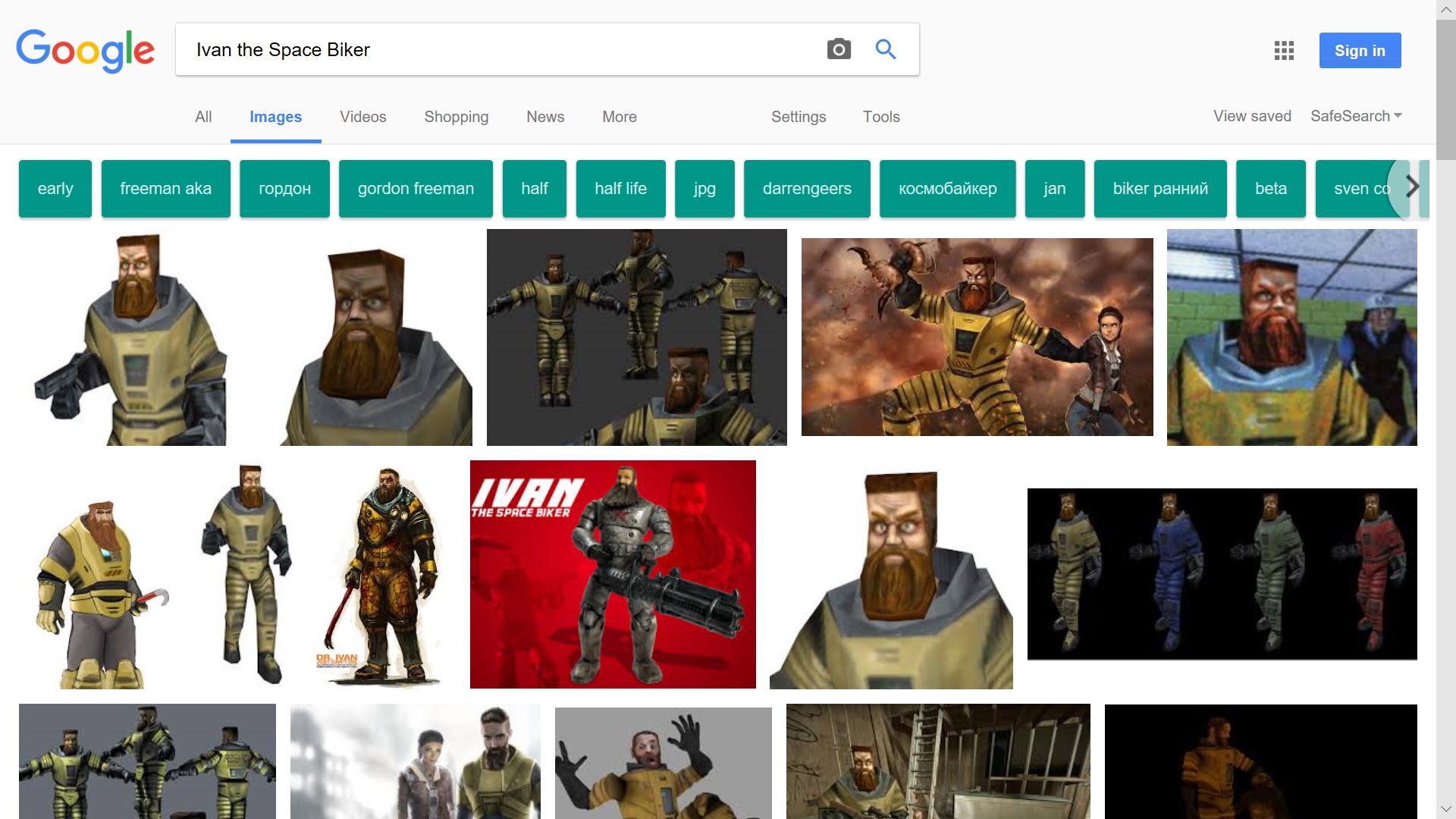 ML: I never heard about Ivan until pretty late; the others joked about him. I never saw that character in the game at all. The experiment gone wrong was already part of the story, but when I first started working on the game, it was something that had already happened when the game began. I eventually saw a way to have it happen as part of the game, and that worked out better. There was no attachment to a visual (bespectacled) Gordon though; that happened mostly in the marketing. There was a player model for multiplay, and we had to put something on the box, but I thought we might ship without ever establishing a visual identity for the character—I favored not making him look any particular way.

Nu: A follow up to the final character model of Gordon coming late to the game: if Gordon’s character model had been finished earlier, do you think the game would have been more cut-scene heavy, or was a silent protagonist with the story unfolding right before his eyes always what you had envisioned? Did you ever wish the game had more cut-scenes allowing you more chance for exposition, or did you welcome the “show don’t tell” story telling challenge?

ML: I never wished for cut scenes, but I assumed we would have some. Now I can’t imagine it with cut-scenes…the lack of them became our virtue.

Nu: I’ve always thought that telling the story of the Black Mesa Incident from multiple viewpoints (including Blue Shift & Opposing Force) was brilliant, and have always looked for more games to utilize that same method of story telling, but it has never caught on. Gamers seem to demand direct sequels, continuations of the stories of their favorite characters, it’s often rare for different games to even be SET in the same universe (such as Half-Life & Portal, or Halo & Halo Reach, or in the form of movies, A New Hope & Rogue One); working in the game’s industry for so long, have you ever deduced why this hasn’t caught on more?

ML: It was Gabe’s idea, I think he had a good sense of how this would free up other developers to work independently and with minimal constraints based on our material.

Nu: It’s been said that an episode of The Outer Limits original series, The Borderlands, was also part inspiration for Half-Life. In this episode, a husband and wife team of scientists tinker with inter-dimensional travel on behalf of a mysterious benefactor. Additionally, internet sleuths have learned that the Easter egg photograph of the baby girl in Gordon’s locker is the real-world baby Izzy Teasley, but it seems to reinforce the concept of Gordon having a wife and a family. Was there ever a plan to give Gordon a wife when Half-Life was being developed – perhaps as a co-op player, or AI partner the likes of what Alyx Vance would become in Half-Life 2?

ML: No, Gordon was supposed to be a loner. The locker photo has been retconned variously, but it wasn’t meant to be a kid of his own…otherwise, we would certainly have had Barney inquiring about “the wife and kid” or something like that. I guess it must be a niece or something. I’ve never come up with an explanation that seems right personally. Barney was the AI partner that we were able to manage at that time, and even having him follow you around and take your target was kind of a late development. When I got there, the security guards were likely to shoot at Gordon. Mike Harrington came up with the idea of having them join the player, and then we applied it to scientists as well, so that you could build puzzles around this behavior. We immediately saw people getting attached to their buddies, and being sorry when they were mowed down by turrets the player had led them into, and this suggested ways to play with the NPCs in HL2.

Nu: Speaking of mysterious benefactors, the iconic G-Man recently received a thorough examination by none other than MatPat on Game Theory. His theory deduces the G-Man himself to be a form of Nihilanth. Care to confirm or deny any of his theories?

ML: I think trying to conflate the various characters is an unsatisfying kind of reductionism. It suggests that every loose end has to be tied to another loose end, and it makes the universe feel small. Why would the G-Man be a Nihilanth? There’s a whole cosmos out there. Surely there are an infinite variety of things, races, conflicts, motives, characters we’ve never seen. The G-Man in my estimation is a mystery the players don’t have enough clues currently to solve…it would be a long time, and many game installments, before you’d have anything like a fuller picture of the G-Man’s nature. It would have been fun to keep building it up slowly. I resist the temptation to solve everything right away and close off possibilities.

Nu: While many players thought nothing of it when Half-Life 2 was released, was there ever any worry of “backlash” when Alyx was made as an Afro-Asian character of mixed race? Or what about the opposite, did anybody think it was bold and empowering to create the character in this way? Or was it never really discussed?

ML: If it was discussed, we thought of it as a positive in every way, and did not anticipate any kind of negative response from our audience, nor did we get any. Keep in mind that in the period from HL to HL2, there still wasn’t really any interest in characters in the game, very little interest in the story. People wanted to know about gameplay and weapons initially. It took time for them to care about characters, and even longer to care about an ongoing narrative. We just wanted to come up with characters we thought were interesting, and that actors would be able to sink their teeth into. The most meaningful moments for me came when Merle Dandridge, the voice actor, told us how she found the character personally empowering, and she was able to bring her passion into inhabiting Alyx and bringing her to life. I didn’t realize this until sometime later, maybe when we were working on the episodes.

Nu: Your writing has been described by others as “Lovecraftian” and “reminiscent of… Philip K. Dick.” But in your keynote talk from 12 years ago (which was almost 10 years after the original release of Half-Life), The Hypermodern Muse, you talk about how envious you were of the folks at id Software creating “wordless but intense experiences.” You have continued to write fiction novels and short stories, so it’s obvious that words on a page continue mean a lot to you. Given how much story telling in games has changed since the original Half-Life, if you were to asked to give such a keynote today, would you have the same high praise for video game writing, or do you think short stories and novels about horror and sci-fi are still where your heart is?

ML: Writing in games has continued to improve, and if a game benefits from writing, it never hurts to have the best quality. But many of my favorite games remain the wordless ones. And at this point, my desires have pretty much come back full circle to wanting to get better at the thing I started out doing. I feel like the last decade in particular, where I was no longer working at a high level on games but also not putting much time into my own writing, derailed me. I’m looking for a way back to my own path, whether it’s a continuation of my original one or something new. I don’t think I’d have much worth putting into a keynote of that sort at this point. A lot of other writers are doing superior work in the field as it stands right now; it would be much more illuminating to hear about their experiences.

Nu: Do you ever feel a bit like your own character, Derek Crowe? That is to say, do you ever think that your work became so popular that it brought monsters to your doorstep in the form of internet trolls?

ML: I hope not! He’s a cautionary character. When it comes to writing, I’ve always believed in what I do. I am a cynic most of the time (which is to say, a gullible person who has been burned a bunch of times by their own desire to believe all kinds of crazy things), but never when I’m writing. Even writing for Dota 2, a job I believe any number of other writers could have done just as well as I did, I found ways to do writing I was proud of.

A HUGE thank you goes out to Marc Laidlaw for taking the time to answer my questions! Some of them have been turned into a video on Half-Life’s story over at OurStorySoFar.tv!