I recently ran in to an issue I’ve seen at least a dozen times before. This time, however, absolutely nothing I have tried before would fix it.

I will save the exposition for the bottom of the post, the short version: Microsoft’s official fixes wouldn’t even work because the standalone installers had the same problem as Windows Update, and every other guide, manual fix, and 3rd party tool I attempted to use failed!

NOTE: For the purpose of convenience, I’m uploading the Windows 7 x86 & 64-bit versions of each of the KB Patches I talk about in this article. I link to the KB articles, and you should always visit the articles to see if there is a newer version than what I am posting, but because I know Microsoft loves to move things around on their website far too often, I’m hosting files locally as well.

BEFORE YOU BEGIN (prerequisites?): Make sure the computer at least already have Service Pack 1 installed on your computer (to check this, hold the Windows Key and press PAUSE on your keyboard; if you have SP1 installed, it will say Windows 7 with Service Pack 1 near the top of the window that pops up, if it just says Windows 7, you need to install SP1. I’m not mirroring this file locally as most pepole likely already have it). Also, although I don’t think this step was 100% necessary, it absolutely cannot hurt to download and update to the latest version of the Microsoft Update Client (KB2887535) (local download: 32-bit | 64-bit). Although I don’t believe this update requires a reboot, it would be smart to restart the computer if you’re prompted to.

Now, on to the final steps of how I fixed this issue. There may seem like a daunting amount of information here, but really it just comes down to steps 4, 5, 8, and 9 – the rest is just me being very thorough for people with less troubleshooting experience. Lastly, I know what some of you are thinking: that you’ve already downloaded these updates and they wouldn’t install, thanks to the stand-alone installers getting stuck at the same point. I address that in steps 4 and 7. Read on to find out! 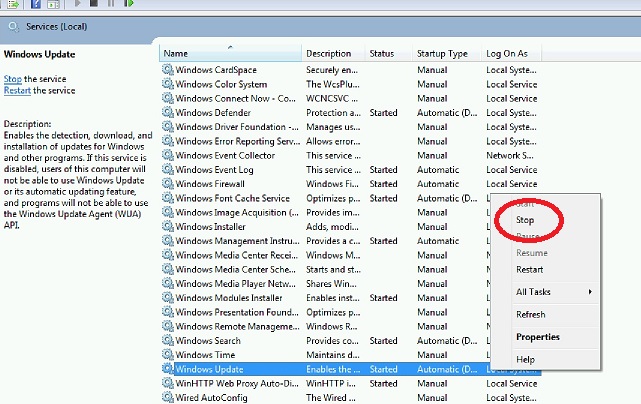 The problem was that a brand new Windows 7 computer (pre-loaded with Service Pack 1), when told to check for updates via Windows Update, would sit at “Checking for Updates” without ever showing me how many updates were waiting to be installed. It was just stuck at “Checking For Updates.” One Click fixes, scripts, even manually resetting Windows Update components per Microsoft’s own instructions did not work for me.

Finally, I found some recent Knowledge Base (KB) articles which sounded promising. However, after downloading the updates individually, the stand alone installers were stuck at “checking for updates on this computer!” I was at my wits end knowing that even the fix for the problem I was having, was getting stuck at the same step. Why would you make your stand-alone installers use the same procedure as the installer that is broken!? It seems asinine.

In the end, I’ve learned that disabling the Windows Update service, then allowing the Standalone installer to trigger the service allows it to work properly in its first few seconds online, before it has a chance to go awry. Follow my steps above and you should be updating your machine in no time!