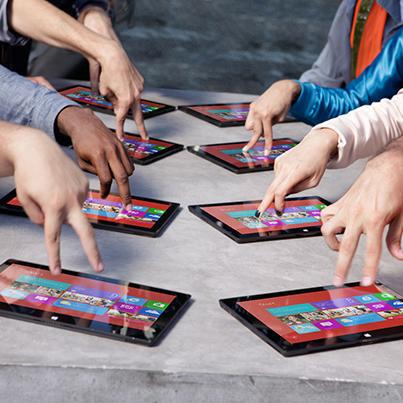 Touch Cover – within minutes I was tapping away, nearly full speed. Now, I will admit I have already acclimated myself to the smaller typing space of a netbook, but it wasn’t the space I had been worried about, it was the lack of a spring-feedback key-press. It turned out, I was ready for the change. The small touch pad at the bottom makes moving the mouse cursor a breeze, and the easy to distinguish left and right click took no time at all. It, too, recognizes multiple finger touches, just like the touchpad mouse at the bottom of a standard laptop. So, if you don’t want to swipe at your screen, you can easily use two fingers to scroll left and right through your Start Screen. The keys are pressure activated, so they aren’t so sensitive you can’t brush over them or find the home row, but you don’t have to press hard to start typing. The cover is intelligent enough to disable the keyboard when swung fully back behind the tablet, so that your holding it on the backside doesn’t result in random key-presses. The magnetic connection works as advertised and can be removed or attached with ease, and is heavy duty enough to be held by just the keyboard to show off for a few friends – it’s one of those features you hope you never think about, but it could be the life saver down the road!

Screen – If you put the same image on a Surface RT and an iPad with Retina Display, and set them both on a table a few feet away, you would be hard pressed to see the difference. But up close, I have to give the better quality to the iPad. The extra pixels do make a difference, but what impresses me about the Surface is how good it does look at the resolution it is at. I’ve had other devices at the same resolution that didn’t look nearly as good, but as the sub pixel rendering and the ClearType fonts are used, the picture begins to look less much more smooth. Although not as sharp as The New iPad’s screen, the Surface’s screen doesn’t leave you wanting more – if you didn’t have an iPad 3 to compare it to, you would be impressed. The 16:9 aspect ratio makes for a perfect movie viewing experience for people on trips, although it can make using it in Portrait mode a strange experience. Although, surprisingly, it turned out to be useful when I needed to thumb through a blog-like website. Oh, the screen is also astonishingly responsive, and required no out of the box calibration, and there is absolutely no sign of ghosting in the display.

The Kickstand – it’s Microsoft’s big feature. They didn’t go with a hinge like a laptop, or even like the ASUS Transformer – the hinge between the keyboard and the tablet is free-swinging, and to use it as a tablet, you can fold it back, as I mentioned, deactivating the keyboard. But with the kick stand out, I can comfortably sit at a desk or table and type away at it. I’ve read one review complaining that it was designed for short people on airplanes… but if you’re tall, and you’re at a desk, slide it back, extend your arms, do whatever is comfortable for you. The one locked in position of the kick stand could lead to steep angles for some in cramped quarters, but if it’s so bad, you can easily lie the tablet down.

Music and Sound – This is the Surface’s weak spot. I mentioned this when I spoke about other review buzz for the Surface. Considering it has two speakers, positioned for what could be excellent surround sound, it does not get very loud.

Battery Life & Charging – the custom charging cable is a little unwieldy and didn’t want to go in to it’s magnetic slot the first time I used it. The satisfyingly forceful click of the keyboard’s magnet left me expecting more from the charging cable – and the lack of an LED for charging left me expecting more. There is a small LED on the charging cable, but that doesn’t seem to change color when a full charge is reached. Microsoft Surface with Windows RT seems to recharge much, much faster than my iPad 3. Although I feel a little like it isn’t lasting nearly as long as my iPad, I also need to remember I’ve been stressing this thing like crazy lately – and if I think realistically about it, I’m quite impressed with the battery life. I feel like I charge my iPad every few weeks at this point, but I only use it for a grand total of about 20 minutes a day, in reality. So once the “new toy” factor wears off, I am expecting similar life out of the Surface.

The Desktop experience – I didn’t know this was going to be here. I didn’t know it would look and feel this much like Windows 8. Notepad is here, so is the command prompt; and the command line driven FTP client that’s always been there; and MSPaint; and RegEdit; Windows Explorer; Documents, Libraries like Music and Pictures, Recycle Bin – it’s all here! There is no doubt that Windows RT is a member of the Windows family. Even when you plug in a USB thumb drive, it detects it as an additional drive and you can browse it just like any other computer. The same goes for popping an SD-Card in the MicroSD card slot that hides behind the kick stand, near the charge-port.

USB Hardware – it just keeps getting better. Although I haven’t plugged in the Micro HDMI output, yet, I’m looking forward to just attaching to another display and being on my way. But what I was really blown away by was the USB compatibility. So far I’ve only plugged in a few USB drives, a generic mouse, and an Xbox 360 controller, but literally within seconds every one of them has worked. I was most excited when a co-worker asked me if I could add printers to it. “Let’s find out,” I said. I was already connected to the wireless network in the building – so I searched the start menu for “Add Printer” and followed the blue-colored Windows 8-styled interface that immediately searched the network for available printers. Spotting the one nearest me in the building, I added that (for the record, it was an HP Color LaserJet CP 2025n). A small status bar breezed across the screen for about 5 seconds, and said it was finished. I loaded up the Notepad “desktop” application, wrote a few lines, and printed without a problem.

All in all the Microsoft Surface with Windows RT is an amazing piece of hardware. But you need to understand what you’re getting in to. This isn’t a traditional Windows laptop. It’s a new breed of device, and that can lead to problems of its own, when your expectations are high. It’s not for everyone, but it is right for me. If you’re still on the fence about buying one, come back today at noon for my thoughts on should you buy Microsoft Surface? – it should answer some of your remaining questions! But if you have more, don’t hesitate to leave them in the comments below!