Another time for a walk down memory lane. Join me. Today’s topic, as every Friday, is gaming.

Sometimes there’s nothing like a classic. There’s just no substitute for reliving the good old days. And while I love the Wii’s virtual console as much as the next guy, the fact remains that I don’t have an NES controller in my hand and I just feel like something is just a bit off. Still, I make due… my NES is safely tucked away, but some day I’m not going to be able to resist it’s calls and I will have to blow the cratridges out just to show them I still care.

Just like this week. When I realized I had a balance sitting in my PayPal account that I had nearly forgotten about. It was like surprise money! Money I hadn’t worked in to my budget, therefore, it was easy to spend. I know. People like me are what’s wrong with the American banking system. But we’re great for the economy! So spend I did! 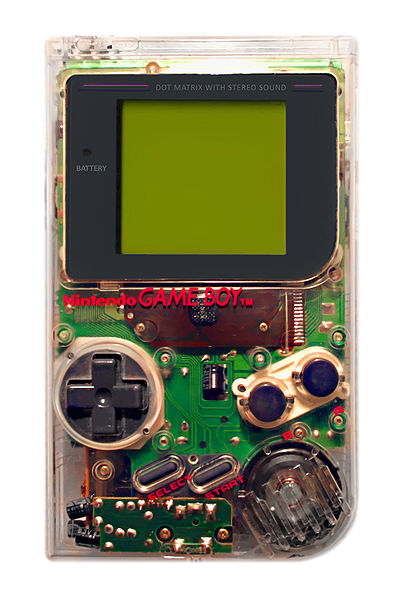 When I was a kid, I had a Gameboy. I only ever had five games for it. I don’t remember for sure what they all were, but I know there were five, because that’s how many fit in the clear plastic case that came with all of the Gameboy’s in Nintendo’s Play It Loud! series. I had a clear Gameboy, just like the one pictured above. And I had to give in and buy exactly what I had before.

It’s a new era. I could’ve picked up an Advance, a Gameboy Pocket, or even a Gameboy color. But no – I had to relive my childhood, just as it was. Metroid II: Return of Samus, and a Clear “Play It Loud!” big, fat Gameboy. It’s in the mail.

I go through these phases. A few years ago I recalled what rediculous fun the Virtual Boy had been. I now have TWO of the consoles and a substantial collection which may exceed 75% of all of the games ever released on the console in both the United States and Japan.

I often wonder if I’m going to stick with “emulation” and things like the Virtual Console (I like to “go legit” whenever possible, and trying to play ROMs on the PC never had the right feel, to me). But then I get this urge to be a completionist, and I miss the feeling of sliding the power button up on the Nintendo 64, or pressing the Eject button of the Super Nintendo. I even remember buying the “revised” NES console when I was a kid, because I had heard it would have less trouble playing games (the Super Nintendo would play anything you threw at it, almost 100% of the time, why wouldn’t this!?).

I didn’t get very far with my experiments. After a few minutes of trying, the worth-while efforts of blowing imaginary dust off of copper pins were worth every effort, so long as it meant I would be able to use my Game Genie from Galoob! Nothing else mattered to me more – when I realized that the extra width of the Game Genie wouldn’t be accomodated by the new smaller Nintendo Entertainment System, back in the box it went, and I returned it to the store. I wouldn’t do without my unlimited turbo in Excitebike.

I remember all of those things I had throughout the years: the Super Scope Six that I borrowed from a friend, the Game Genies, the Super Gameboy, when my “soon to be ex friend” erased my Super Metroid save files… and the fact that the NES in my parents’ attic (waiting for me to have a more permanent residence) is the same one I’ve had since I was 7, and my dad brought it home from a yard sale after finding it for thirty five dollars. I remember it so clearly – the car was parked on the street out front of our house. I still can’t recall any reason why it wasn’t in the drive way, we only had one car at the time. But he popped the trunk of that Ford Tempo, and there it was. A Nintendo. Two controllers. A gray Zapper. The power brick and RF Switch. And Mario Brothers with Duck Hunt. Throughout the years it had stickers applied to it (stickers from my Dentist Office visits, of Mario and Yoshi holding Tooth Brushes, of course), and removed – but it was never tarnished with a marker, or a name written on it, or manufacturer’s stickers peeled off of it. I’ve always been a bit picky. Games I bought new I kept in pristine condition, boxes, manuals, and any other inserts. Games I bought used I was always a little sad if they didn’t have all of the goods included. I remember my first “other” game was Mega Man III – not even a dust cover for it. I remember the weird line under Top Man’s portrait on the level select screen. I still find it the best in the series, and this strong connection is undoubtedly why.

As you know by reading the about me page, I sold most of my gaming history off at one point. And as I slowly regain it, I wonder if it’s an homage to my nerd past, or just an early mid-life crisis? But either way, I’m glad to be taking part in it. And I’m glad you’re all along for the ride.