This review was originally written for Sudhian Media, I had even invented a watermark to place on my screenshots… I pulled this from an archive and wanted to share what I could. Enjoy my original 2003 review of Max Payne 2!

Having been a huge fan of Max Payne’s first adventure two years ago I had been watching this game like a hawk. Commercialism be damned, this game has been overlooked in the midst of Doom 3 getting more press, Half-Life 2 being important enough to make CNN Headline News, and Halo for PC being whined about by all gamers this side of the Xbox for not living up to their expectations. While I’ve got something to say on each of those topics, I’ll stick to the task at hand.

Max Payne 2: The Fall of Max Payne had me in its grips before it went gold. Hours after it went gold, I believe I wet my pants. About a week later, October 15th, the day the game went on sale, I went to Wal-Mart, whimpered something about “forty dollars! That’s more than my weekly paycheck!” and then plunked down the coinage. Face it, $39.93 actually is a good deal for a brand new game… but it still hurts the pocket book of a college student on work-study pay!

So I snagged the game brought it home and drooled over it for twenty minutes. First thing I saw, of course, was the attractive packaging. The full color box features everything you could hope to see: screen shots, quotes from the game, quotes from reviewers, system specs, and a lovely “Mature 17+” ESRB rating with more warnings than the first Max Payne dreamt of! Now we’ve got everything under the sun in this game: “Intense Violence, Strong Language, Blood,” and last but certainly not least, “Mature Sexual Themes.” Let’s hear it for pushing the limits in a hopefully tasteful fashion! Remember, Rockstar Games did both Max Payne 2 and Grand Theft Auto III. While GTAIII was an amazing seller, some called it tasteless and many parents were out for blood, outraged at the game… did they turn Max Payne 2 into GTAIV, or will they keep Max Payne alive in a more realistic setting (face it, how many mob bosses do you think say “friggin'” all the time?).

Back from my little rant, there is still more to the packaging. You slide the ‘book’ out of the box, and fold it open, revealing two CD’s packed with the game. The discs are of the lovely black and white cover art, while the backing of the CD book is full color scenes from the game. Looking through the manual you also see more full color pictures. The packaging is well worth it, unlike this time last year when I plopped down $50 for Unreal Tournament 2003 and received three discs in paper sleeves (I get higher quality packaging when I download abandon ware games to floppy disk.) No free mousepad, like with the first one, but that’s fine. That’s the packaging, that’s not all we’re paying for now, is it?

Installation
Install process is relatively quick for a two disc game, and the second disc is required in the drive at all times to play the game.

I start the game, and to my surprise there is a “Previously, on Max Payne” button in the menu. For those who haven’t been replaying their Max Payne, or those who never had a chance to experience the first game, this is an excellent place to start. A little addition to the graphic novel, reminding you just how you got to this point, and even filling in a little to the prologue of this game.

You start the game in the classic Max Payne way with three non-linear jumps through time in twenty seconds! After being puzzled, the game lets you rampage your way out of the first level and into the rest of the game.

The engine really is the same as that of Max Payne’s MAX-FX, but with additional enhancements from the Havok engine ( http://www.havok.com ). First generation Payner’s noted the lack of coordination their hero must have had, when they could not jump and shoot simultaneously. A few thousand complaints later, these words rang loud in developers minds while MP2 was under development, and the feature was added. Whether in bullet time or not, you can now jump over an obstacle, and not be a floating duck!

Another nice addition is the ability to dive or bullet-time dive and remain on the ground, firing your weapon until your clips are empty, if you so choose. 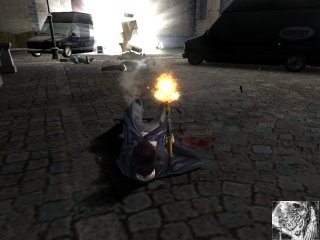 Cool changes to the engine itself include new flame effects that give Molotov Cocktails a new life, tons of physics revamps detailing everything from boxes, to two-by-fours, to little rubber balls on the floor, to the addition of “rag-doll physics” much like those seen in Unreal Tournament 2003. These are an important addition to every new game and a feature I’ve been waiting for since the days of Castlevania on my NES (only my toe is touching the platform… why don’t I fall?).

Without giving away too much of the story, a lot of our old favorites are back, including Jim Bravura, Vinnie Gognitti, Captain Baseball Bat Boy, Mona Sax, and Vladimir Lem. Max Payne may look older, but he’s still got all of his old moves, and some new bullet time tricks to boot.

Gameplay Modes
There are several modes of play in Max Payne 2 which are sure to keep you interested as long as possible. From the instruction manual:

Detective: default game play mode is the only mode available after first installing Max Payne 2… (the others are unlocked after you beat the game in this mode). [In this mode], game play is altered by a self-adjusting skill level system. Enemies adjust their behavior according to Max’s progress through the game.

Hard Boiled: For more of a challenge [this] mode is like Detective difficulty without the benefit of self-adjusting skill system. Enemies are always set to their toughest level.

Dead on Arrival: The ultimate challenge! The player… has a limited number of save games available per level.

New York Minute: Each map starts out with a timer ticking. Take out enemies to reduce the time… the faster you are, the better.

Dead Man Walking: Death is inevitable, the question is how long can you keep going. Stay alive as long as possible in this fast paced deathmatch… the map has a single enemy, and as time progresses more and more enemies are spawned into the map…. The longer you stay alive, the better your score.

Sound
Max Payne 2 supports EAX sound and even with my now meek Creative SBLive 5.1 / DTT2200 combo it was still very impressive. The surround sound techniques are amazing, the environmental audio is truly astonishing, and the extra attention paid to effects is incredible. When you walk into a building and you hear the ran ‘pitter-patter’ off of a tin roof, or when you listen to an echo of a voice down the hall… these are the sounds that set Max Payne apart from all competition.

The voice acting is, again, superb. I haven’t check the actors list, but I think some of the characters’ voices my have changed. Even still, amazing skill and talent has gone into this and everyone of the characters, even those who you only know for two lines, or the ‘filler’ voices of “gangster #1” type characters – attention was given to every last voice you will hear in this game.
Graphics

The game looks just as good as the original, although not entirely different. A lot of people are somewhat upset that the game took so long to bring a sequel to store shelves, based on the fact that the engine is, for the most part, unchanged. If the game ended with a cliffhanger, you had to think they knew where they were going, so they couldn’t have taken so long to write it, but with few changes aside, the graphics really are still superb. Enough changes (such as the afore mentioned “rag doll physics”) were made to the engine to make it feel truly like a title from 2003, not just a delayed 2001 game.

Hardware
Max Payne 2 boasts a “recommended hardware requirement” of a mere 1.4Ghz Athlon or 1.7Ghz Pentium 4, Celeron, or Duron CPU. Relatively low end specs for today’s games. The biggest ‘recommended’ detail was 512MB of RAM. While a lot of gamers do have this, 256 is still pretty standard. This is stated as the ‘minimum system requirement’ – but I think the game should work fine with 256 MB, especially once you get the patch.

Updates
A patch for Max Payne 2 was released shortly after the game was released. It drastically improved load time on low-end (and even high end!) systems. After that, the “modding tools” were released on the web, allowing players to make their own modifications to the game, which will, I’m sure, include more ‘Matrix Payne’ mods like the first game did! And finally, the bonus chapters were released. Don’t get too excited, it’s really cool of the company to release an addition to the game so soon, but they aren’t so much new “CHAPTERS” as you would think of additions to the single player game, but rather two new levels added to the “Dead Man Walking” play-mode that is, again, added to the game once you’ve beaten it once. Additionally, another major boost was given to the modification community in the form of sources for maps and models to be used in maps. To quote the 3D Realms website on these Example Levels:

The set includes source .LV2 files for a _huge_ amount of different physical objects, ammo boxes and whatnot as well as the first Dead Man Walking .LV2 file.

All of these can be found at almost any of your favorite 3d-gaming related download sites.

Max Payne 2 has a storyline that will suck you in, much like the first Max Payne. Your old friends are back, the graphic novel art is back, and once again you’ll be swimming in metaphor soup. The game play boasts the few new features some of us have been begging for, and the sound will have you wanting more.

The brief ‘sexually explicit’ scenes may ward off some parents, but believe me, I’ve seen worse on prime-time television. The more gratuitous use of “The F-Word” makes the game more realistic in a sense, but may also be a warning sign for parents looking to buy this game for their 13 year old for Christmas. If the violence is something your household is okay with, be sure you know what you’re getting into with the language – the warning is right on the box, don’t say nobody told you.

It may be slightly shorter than the first, but it’s certainly a worthwhile investment. Games with storylines this well thought out have been unseen since 3D graphics became all the rage… with Max Payne 2 you can have your cake and eat it, too.