I don’t know why I find these things so funny… maybe it’s because marketing folks think that the average person can’t see the fact that we know what point they’re trying to drive home. But when someone makes a video calling them out on it? It’s always a good laugh. Here are the need to know points about this week’s Xbox Reveal, and Xbox One announcement.

Microsoft, you controlled the message so well, during your announcements. I was excited to hear about the offerings of the Xbox One. But the deluge of information that came out as soon as the press conference was over? And let me guess, now we’re going to have to wait until E3 to get any answers?? Even then, we probably won’t get the answers we’re hoping for. I don’t have any more official answers than anyone else, but let me take a crack at some of these rumors floating around.

I’ve had people ask me about playing a NEW game that isn’t already registered, if your console hasn’t been connected to the internet in 24 hours? My first question is why not? Do you have a regular problem with returning from the store and finding your internet out? Maybe you should be more angry with your ISP than Microsoft. Now, if it’s not a bad internet connection, then what? Xbox Live has tens of millions of users. The users are active and online

Installing games? Microsoft indicated, and developers have confirmed, that games will come with a one-time install code. What’s still unclear: is installation required? If you can play the game off the disc without installing it, then you’re trade in may be worth more at a Gamestop like store when you take it in. If you’ve already used your install code, you get less value, Gamestop can’t make as high a profit, and Microsoft and the developers charge you a fee (unannounced. $2? $10? $30? Does the price scale down over time?) to install the game on another console. In my opinion this is a bad move and it will actually drive the used-game market through the roof. What’s stopping me from buying a game brand new for $60 off the shelf, installing it to my console, then selling it to Gamestop for $30? I basically just got a brand new game on day one for $30. I’d do that every day, why would I buy a used copy at that point? 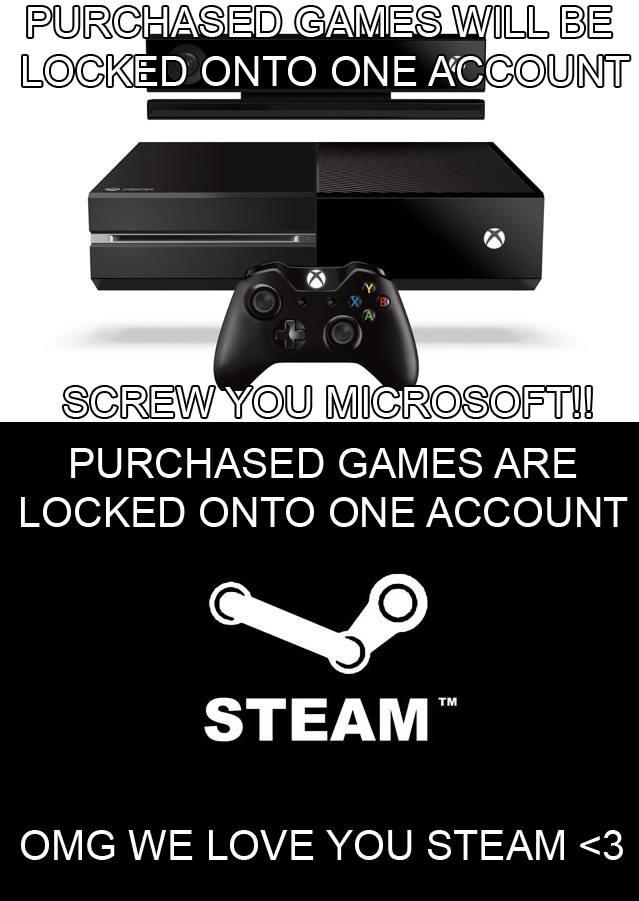 Is Kinect watching me while I sleep? Well, we know Google.com is. If you have Chrome installed, just go to Google.com and say “OK, Google.” It will await your instructions. So are most phones, computers, tablets, and cars these days. Even displays in grocery stores. You’re going to get used to this one or die in a tin-foil hat, unfortunately. The good news, is, although a Kinect connection is currently required for the Xbox One to work, there are settings in the console which allow you to turn off all of the features. Microsoft, at present, also suggests that all voice commands, etc… are parsed locally by the console, not sent back to Microsoft HQ for analysis or archiving of any kind.

Used Games? MajorNelson tried to clear this up a little bit, but as you can see from the 3,100+ salty comments below the blog post, it didn’t go well. The point he’s trying to get across, however, was actually pretty smart. NOTHING, NOTHING AT ALL IS SET IN STONE. And even the things that are “official” when the consoles start rolling off the assembly line this fall, could change with a simple firmware update between the time they’re manufactured and the time they hit store shelves. Anything can change at any time, that’s the beauty of our connected world. I’m not worried yet, because so very much can still change between now and the time the Xbox One actually hits store shelves. I just wish Microsoft would try to do a better job at calming the masses, some time BEFORE E3 next month. 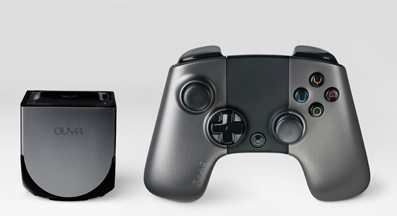 Well… Ouya’s there. Because I suspected I may be in the midst of moving when the Ouya consoles were shipped, I had it addressed to my parents’ in Pennsylvania. I did not end up moving as I had thought. The console arrived the day immediately following my most recent trip home. I would not be returning home in two weeks. That day is upon is. This article publishes at 6 AM, Eastern Time here in the States. I’ll be at work around 7:30. If all goes according to plan, I should leave work around 4:30. Perhaps earlier if I’m lucky. Hopefully not much later if unlucky.

Then I drive for 3 hours, listening to fun music while I cross the state line and arrive at my parents’ home and treat myself to a nice 4 day weekend. Where I plan to immediately rip open the box containing the Ouya console, hook it up, and begin tinkering with this thing that I’ve been waiting for for such a long time! It’s been driving me crazy to know I could be toying with this thing, but I have to wait, wait, wait for my next planned trip to Pennsylvania. So close but so far away.

Hopefully I’ll get some good quality time with my Ouya and I’ll be able to write more about it in the coming days, weeks, and months!