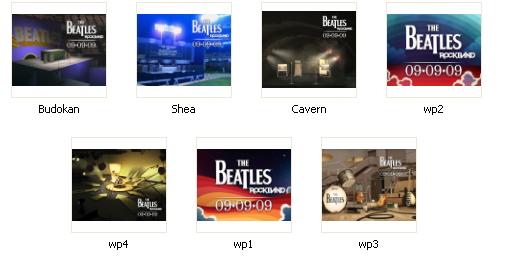 Here’s a whole slew of eye candy for you Beatles fans out there! Desktops of different sizes that you can use on your computer, or even throw on a USB drive and use on your PS3 or Xbox 360! The image above shows a small thumbnail of each picture along with it’s filename.

The files were released in the improper order on TheBeatlesRockband.com’s Pre-Order Club page, but I will try to help clarify when they were released and what’s in each picture (as a Beatles fan)!

While Halo fans wait for the application to come to Xbox Live Arcade, it seems as though we may finally be getting something else we have wanted for a long time. How soon we forget. We should have known that this was coming, what with the job listing that detailed an “online infrastructure” that combined “console, web, and mobile to create an immersive Halo World that follows the dedicated Halo fan wherever they go.”

With companies like In-Fusio supposedly working on mobile portals for Halo since 2006, and rumors of Mobile versions of Halo games on the horizon, I think it’s very clear that Halo Waypoint will find its way to Windows Mobile.

Personally, I think that an iPhone App is inevitable, if they sincerely want to reach their market. But do expect to see a certain level of dedication between Bungie and Microsoft, seeing that the Windows Mobile Marketplace is coming so soon. Think about it, Bungie has already said that they expect Waypoint to be available “earlier rather than later” in the fall, and (although no date has been announced yet). Windows Mobile 6.5 users should anticipate access to the Marketplace no later than early fourth quarter, while 6.0 and 6.1 users should have the app available to them by the end of 2009.

What the mobile version will entail, I’m not certain… but I would venture a guess that it will be more than a simple RSS reader. It may not be as full featured as the Xbox client, but I anticipate some streaming video and audio, as well as access to other things like your Bungie.net service record would be planned.

With a lot of behind the scenes changes at WinBreak (some good, some not so good), I have been busy working on a few articles (some taking far longer than I anticipated). So, why not spend a little time getting to know just one more member of our great Xbox Live community? This time, it’s GreenBoxFalcon, who submitted his answers to me a couple of weeks ago. Enjoy!

Nu: What’s your Gamertag, and what’s the story behind it?
My gamertag is GreenBoxFalcon. Well, it actually was supposed to be something else. Maybe, GreenBoxNinja? GreenBox stands for Xbox (at least I see it as a green box, since it’s interface is mostly green). But that one was already taken. So, since I got a “Falcon” edition of Xbox 360, it simply became GreenBoxFalcon.

Nu: While the original Xbox may have had an interface that wasn’t userf friendly, that green wire-mesh thing really was cool! I suppose the Xbox 360’s Dashboard has always been a little easier to navigtate, though! Where are you from, how old are you, and what do you do (school, job, family, hobbies)??
I am from Independence, Kansas (now living in Europe for a while) and I am currently a high-school senior. I am also a .NET software developer (creating various desktop apps) and actively using XNA to create simple games for my Xbox 360.

Nu: How long have you been gaming in general?
Probably it was early 1997 when I first played SimCity in DOS. Since then, I really enjoy playing video games.

Nu: What was one of your favorite Xbox / Xbox Live moments?
When I actually received my first Xbox 360, unpacked it, plugged it in and started – and the nice-looking Xbox 360 UI showed up on my TV!

Nu: That seems to be “the moment” for quite a few people. It’s just a great feeling! Which Xbox 360 Achievement are you most proud of?
Completionist (Need For Speed: Undercover) – I really did complete all the events in Career Mode and I am quite proud of this.

Nu: Are you currently working toward any achievements?
Oh yes. It is called Notorious (once again, Need For Speed: Undercover) and it is only given if you finish 119 races in multiplayer. I am on my way, but I still got quite a few to go.

Nu: Well done. That is sitting on my shelf and needs to be played! What game(s) are you playing the most now?
It really depends. I guess I am playing mostly Need for Speed: Undercover now to get some last achievements.

Nu: What’s playing now (what music do you listen to when away from your Xbox or when listening to music ON your Xbox)?
Completely random music. Whatever plays on my Zune. It is either Kill Paradise, American Hi-Fi or Li’l Wayne.

Nu: Sweet. I like it when people have broad tastes in music! Do you try to stick with one Gamerpic, or change it frequently?
I change it depending on my current avatar, and I change the avatar monthly.

Nu: What is your current favorite Xbox related website to visit?
Xbox.com since it is the place where I can keep track of all my achievements and friend activities. Plus, I can interact with the huge Xbox community on the forums.

Nu: What upcoming game are you looking most forward to?
I think this would be NFL Madden 10. I like playing video games that involve football, so this would be a nice addition to my collection.

Nu: Do you have an all time favorite game, for any console or the PC?
This would be SimCity on PC (I just enjoy building something on my own) and the NCAA Football series on Xbox 360.

Nu: Do you have any gaming buddies you frequently play with / want to make almost as famous as you?
I play with a lot of different people all the time, so I can’t really say that I mostly play with someone.

Nu: Any parting words for the droves of readers?
Yeah, sure. Guys, when you play, it is just a game, so just sit back, relax and enjoy it.

Nu: Words to live by. Too many people get far too heated sometimes – enjoy the game! Well, everyone, that’s GreenBoxFalcon for ya. Send him a friend request or a game invite some time! And remember, if you want to be featured on Better Know a Gamer, just drop an email address here, and check your email!

We’ve heard a lot of rumors, people snickering in podcasts, “guessing” that there will be a new “slimmer” PS3 launching soon… but if you want any further kind of confirmation, take a look at the KMart website, today! No pictures, yet, but seems pretty official, don’t ya think?

Nothing super special here, but just wanted a simple news post to show that the site is still alive and I’m working on some fun stuff.