END_OF_DOCUMENT_TOKEN_TO_BE_REPLACED

By now, most people know that I love to use NTPassword to reset passwords of Windows 2000, XP, Vista, and Windows 7 computers. The developer says it works on Windows 8, but here is the trouble I ran in to this weekend on a co-worker’s Windows 8 machine.

First, I couldn’t just reset the user’s password online, because the computer was brought to me in our office and was not connected to our WiFi (and the slim netbook-like computer did not have an Ethernet port), so it had no way to receive the updated password from the website. I followed my own steps to reset (blank) the password, but it wouldn’t allow me to log in. Finally, I devised another solution, and this is what worked for me. 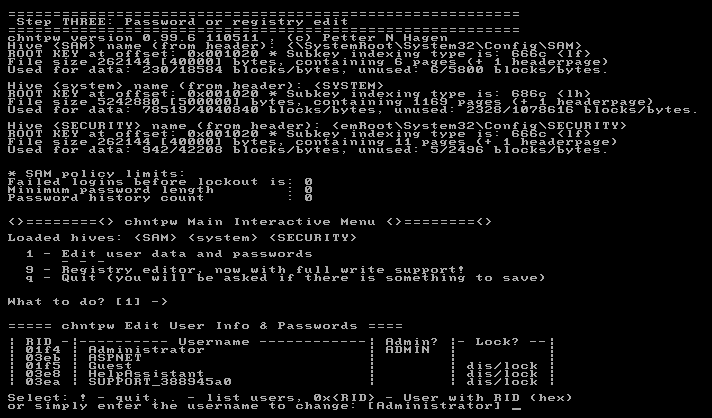 END_OF_DOCUMENT_TOKEN_TO_BE_REPLACED

Update: Microsoft has finally brought the KB article online to verify that this “November Update” does bring some new features, but some of the biggest advancements are described here in our post from yesterday. Original post follows…


Windows Server 2012r2 machines recently saw a Windows Update made available, but when clicking to the Knowledge Base Article for more information, the article (KB3000850) was missing. So I did some digging and found this PowerPoint presentation which specifically mentions a “November Update” on slide 7, and confirms the KB number (KB3000850) on slide 20. The slideshow was part of a Microsoft TechEd Europe presentation, and discusses a brilliant new technology being added to Hyper-V for Windows server to deduplicate data within VDI files.


Before we go any further, the large update is also a rollup of all prior updates released for the Operating System, and includes new features. Consider it similar to a “Service Pack” in the old days – you don’t need to install the August Update, then this November update on a brand new machine, but this update should be considered a shortcut when deploying updates to a new computer. If you already have a computer or server running, the update is still considered optional, but will obviously include some new features. Once the Microsoft KB article goes live, you will be able to retrieve more details there.


Let me do my best to break this down in the simplest terms. A hypervisor server might have thousands of VDI (Virtual Disk Image) files. Virtual hard drives. Those drives can have lots of duplicated data, taking up space. Imagine ten hard drives with the same version of Windows. Why have ten identical copies of Windows when you could have one that all ten virtual machines access? This is, of course, an extreme oversimplification of an hour long presentation, but imagine if they finger print the files, verify that different files that need to be made available are available but 100% identical files are de-duplicated, thus saving TONS of space.


I don’t even run multiple virtual machines, and I certainly don’t host a Hyper-V server like some major “cloud-based” companies out there… but this is astounding technology and I can’t believe that they are releasing it to the public rather than hoarding it for their own Azure cloud. I have no use for this update, personally, but I’m excited by it nonetheless, it’s very impressive