Daily posts are going to occur less and less… although they are critical to page rank, I just don’t have the time I had hoped for. I also may be moving publication times for my usual posts from 6 AM to noon (Eastern).

I’ve talked about Anamanaguchi before. They are a chiptune group, who have gone on to do things like Scott Pilgrim Vs. The World: The Game (the soundtrack)

. Recently, they’ve been taking part in a Kickstarter event – hoping to make their new album, Endless Fantasy, more than just an album. I contributed to it as soon as I had found out about it (it exceeded funding goals pretty quickly). Before I knew it, even before they had a chance to realize what was happening, they raised over a quarter of a million dollars.

The band already released the album as a digital download for their backers. Just by that process, they were able to track enough sales to debut the album at Number 1 on the Billboard Heatseakers charts, and #2 on the Dance Chart (putting them even above will.i.am). Anybody looking to get in on it early can order Endless Fantasy

on Amazon, as an MP3 download, a CD, or even on vinyl.

This album strays from some standard chiptune fare. It has a few tracks featuring vocals, other talents of the band are highlighted beyond their standard backing with the chiptune as the main act, and Endless Fantasy doesn’t force every track to be a pop song. Some of the tracks are a bit more introspective, a little bit slowed down – not like the fast action fighting game stuff we heard in the Scott Pilgrim game sound track. But that certainly doesn’t account for the entire album which, I’ve neglected to mention thus far, is 27 tracks. The tracks often drift one in to the other and in the end I’m always left with a positive experience. I might not feel excited and energized the same as after some of their previous work, but I certainly feel refreshed. And that’s exactly what this album is. Refreshing. Different enough from their previous work to not be “just more of the same” – and certainly different from anything else out there. Even other chiptune artists. Anamanguchi’s Endless Fantasy is yet another reason that they are one of the leaders of the genre. And if all that isn’t enough, then check this out: They sent a slice of Pizza in to space. Just because they could. No really, watch below.

Don’t forget to check out Anamanaguchi.com to find out when the unique experience of an Anamanaguchi show will be coming to your town. Further setting themselves apart from anyone else out there right now, they aren’t afraid to cater to their digital fans by animating their album cover art and tour poster! 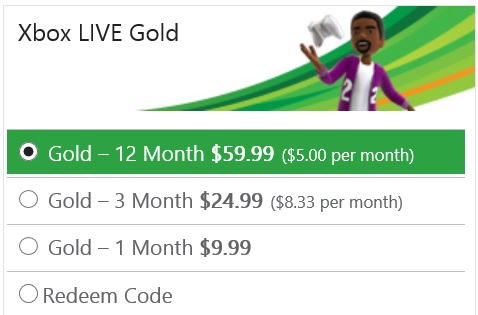 Xbox Live comes in two “flavors” – one is free and the other is paid. They are known as Silver and Gold. Although there has been no public mention of this, I anticipate the offerings to remain the same when Xbox One releases later this year. I’ve discussed the differences between Silver and Gold before. The main points include: Gold is required for using most apps, such as Netflix. Gold is also required for multiplayer online play.

But what does it really cost? Well, a while back the official list price of Xbox Live went up to $59.99 for a 12 month membership. You can buy 30 and 90 day subscriptions as well, but you get the best value buying the full year. The good news is, you can usually find a better deal online. First, make sure you disable automatic renewal (sometimes this doesn’t work and you have to call support). Once you are certain your credit card isn’t going to be charged automatically (and it won’t be charged until the last possible day of your previous membership expiring, so don’t worry about automatic renewal happening too frequently), then head online to find some better prices than the direct Microsoft pricing.

Be sure to check Newegg, eBay, and Amazon for better deals. Amazon gives you the option of getting an online code emailed to you so that you can redeem it immediately, or have a card physically mailed to you for a few bucks less, if you can wait for shipping.