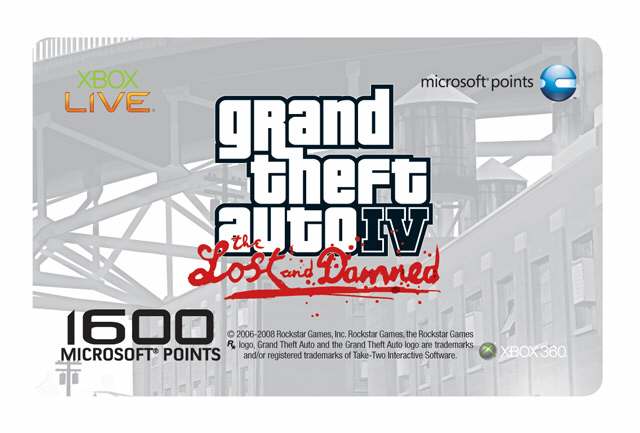 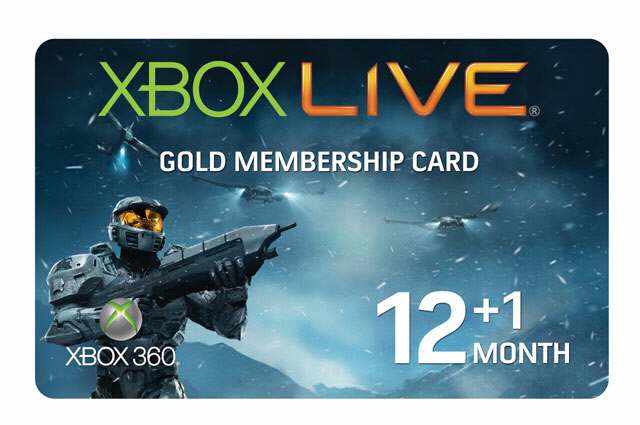 Today, Gamestop confirmed Grand Theft Auto IV Lost and Damned expansion would be available February 17th. They also verified it would be $20. What else is $20? 1600 Microsoft points.

Thus, the no brainer 1600 point card showcasing the artwork for GTA IV’s Lost and Damned expansion.

Also, celebrating Halo Wars, some more 12+1 Xbox Live subscription cards will be coming out with some quaint Halo Wars art. Be on the lookout for some killer looking Spartans coming to a store near you!

Nu: What’s your Gamertag, and what’s the story behind it?
Touchedgolf I was in a rush to get on live so I let the computer make the name.

Nu: Wow, I’ve never met anyone who has done that! Where are you from?
Alabama.

Nu: How long have you been gaming in general?
10.

Nu: What was one of your favorite Xbox / Xbox Live moments?
I don’t know? Becoming a DDB clan member on call of duty 4.

Nu: Which Xbox 360 Achievement are you most proud of?
All on Fight Night Round 3.

Nu: Yeah, when I finally got all 1000/1000 on that game, I was pretty excited! Are you currently working toward any achievements?
Any in Fable 2.

Nu: What game(s) are you playing the most now?
Call of duty world at war, Fable 2,and saints row 2.

Nu: What’s playing now (what music do you listen to when away from your Xbox or when listening to music ON your Xbox)?
Not much, so… red Hot Chili Peppers.

Nu: Do you try to stick with one Gamerpic, or change it frequently?
No, I like my gamerpic!

Nu: What is your current favorite Xbox related website to visit?
www.unscripted360.com.

Nu: Deacon’s my boy! Do you have an all time favorite game, for any console or the PC?
Star Wars Knights of the old Republic on PC.

Nu: Do you have any gaming buddies you frequently play with / want to make almost as famous as you?
TXPaladin and Thumpthis.

Nu: Friends of the site! Any parting words for the droves of readers?
See you on xbox live.

25. I never considered it a lucky number, but it’s certainly a nice milestone to hit! So let’s not delay!

Nu: What’s your Gamertag, and what’s the story behind it?
TP of Justice. I’m really into comics/super heroes so I wanted to have a gamertag that was heroic but also funny so I thought up Toilet Paper of justice that all doesn’t fit so I abbreviated Toilet Paper with TP but lots of people don’t know what TP stands for so I tell them to guess and they come up with suggestions such as Tit Puncher, Terrible Penguin, etc.

Nu: Wow. Just wow. lol Where are you from?
Eastpointe, MI about 10 mins. from Detroit

Nu: I visited Detroit for a 3D Studio Max training class, back in high school! How old are you, and what do you do (school, job, family, hobbies)?
I’m 19 years old living at home and attending Macomb Community College studying Business Management. I got my first job a week out of High School doing Landscaping and Snow Removal and I’ve been working at the same place for 2 years. Outside of work and school when I‘m not gaming I love to go concerts of bands you probably never heard of

Nu: How long have you been gaming in general?
Since I was 6 or so when my mom convinced me to buy Mortal Kombat on the Sega Genesis because it was cheaper than the game I originally wanted, little did she know this would lead me down a path of violent video game addiction

Nu: Ha! That is awesome! How long have you been a 360 owner?
since September 16, 2007 when I decide to buy myself the Halo 3 Limited Edition Xbox 360 as an early birthday present because I wanted to start doing online gaming and could finally afford one

Nu: What was one of your favorite Xbox / Xbox Live moments?
I don’t really have a favorite I just enjoy playing with random outrageously funny people or being just as ridiculous to unsuspecting people.

Nu: Which Xbox 360 Achievement are you most proud of?
all of the achievements in Quake 2, because I haven’t met a person who also does. They’re all 0 points and I have them all because what are achievements actually worth?

Nu: Yes you have! I got’em all! Are you currently working toward any achievements?
All of the achievements I don’t have, but mostly I’d like to 5 star all songs in Guitar Hero 2 and 3 on expert and I only have a few left.

Nu: What game(s) are you playing the most now?
Left 4 Dead, Gears of War 2, and SuperStreetFighter 2 HD

Nu: What’s playing now (what music do you listen to when away from your Xbox or when listening to music ON your Xbox)?
Some of the bands you never heard of : As Blood Runs Black, The Dillinger Escape Plan, The Acacica Strain, Horse the Band, Impending Doom, A Day To Remember and many many more

Nu: I actually love most of those bands! Horse the Band is quite rare. We should hang out, more! Don’t forget Between the Buried and me! Do you try to stick with one Gamerpic, or change it frequently?
I change it every couple weeks or so and have it relate whatever my Bio stuff. I would really like to have a Dr. Doom gamerpic but Microsoft for some strange reason removed the Marvel Ultimate Alliance pic packs from Marketplace. I guess they already have enough money to bathe in.

Nu: What is your current favorite Xbox related website to visit?
Xbox360Achivements.org is my homepage but I prefer Wikipedia for all news/rumors.

Nu: What games are you looking most forward to in 2009?
In order: The Chronicles of Riddick: Assault on Dark Athena, Guitar Hero: Metallica, Street Fighter 4, Halo Wars.

Nu: Do you have an all time favorite game, for any console or the PC?
It’s too hard for me to decide on one, GIGGITY!

Nu: Do you have any gaming buddies you frequently play with / want to make almost as famous as you?
The unofficial anti-clan Clan of: Yo Baby Daddy X, Nasty Poison, XcrotonX

Nu: Any parting words for the droves of readers?
If you play online use a headset or don’t play at all and I lose more than you do, be jealous.

Nu: Take that, everyone who isn’t TP of Justice! Thanks again, and there’s always more room for more in Better Know a Gamer.