Video game sales have been in a slump. Although it really seems like the fall (building right up to the ‘holiday shopping season’) is “prime time” for video game releases, the summer usually sees a few blockbuster titles. Just like summer movies, action flicks, there are usually a few hits throughout the summer. The spring is always quiet, leading up to E3 and the rest of “convention season” but what gives with this summer’s dead silence from the games industry?

What have we had to look forward to? The 3DSXL? Not my cup of tea. The Amazing Spider-Man was released, but I haven’t tried it, yet (although Spider-Man games are a guilty pleasure of mine… seriously, check my Xbox Live history). A Lego Batman sequel, and the latest installment of NCAA Football have recently been made available at retail. Beyond that, July’s chart toppers are last year’s games, like BlackOps or the recently price-slashed Batman: Arkham City.

I have to admit, I’m contributing, but I just haven’t seen much out there that I have wanted to play, lately. Not even B-Games. I know the fall is going to pick up, but when the year after year numbers hit consecutive months of slump, it becomes hard for us “gamers” to prove that our industry is more than just a hobby. I suppose every market has its ups and downs, and after it all this is still a multi-billion-dollar-a-year sector. But I’m sure there are more than a few unhappy CEOs with some major companies recording losses last quarter. Still, all of that behind, the advent of Ouya, and the forth-coming Wii U, not to mention some exciting Microsoft Game Studios titles like this fall’s Halo 4 and next spring’s Gears of War: Judgment. Things will certainly pick back up, but it’s time’s like this I have a backlog to keep me busy!

I’ve been talking with a lot of people who have recently published e-Books. I’m not sure exactly why I’ve been surrounded by it lately, but it might have been a few short stories a friend released for free

by a friend under a pseudonym, or something paid but also hilariously evil, like The Diamond Club

I would, most likely, do a book of poetry, or possibly short stories… but I’ve done a lot of thinking lately as to whether I would like to do something like this and try to self publish, use a service like Vook, or actually try to submit some work for publication with a “real company.” I’m one of those internet guys who likes to turn norms on their heads and do things my way. Just look at this site! It’s grown from nothing at all to thousands of visits a month… sure, I’m not rich and famous, but I’m excited for what the future is going to bring and I love watching my statistics for the website gradually increase. I’m lucky to have so many interested people, and maybe that means it really is time to try and put something together. But will it be what the people are looking for? We may have to wait and see. 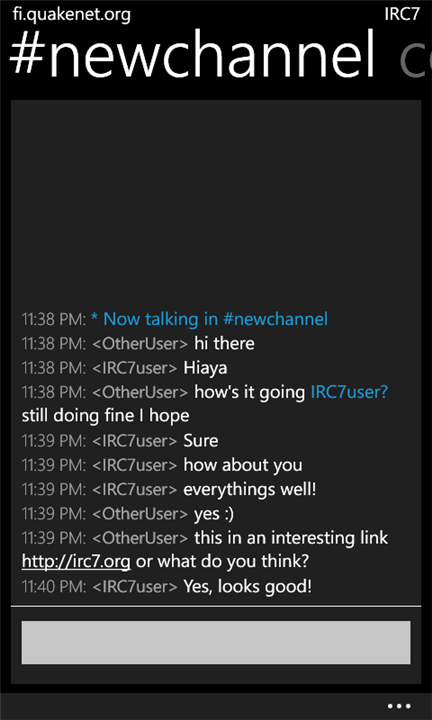 It’s time for App Wednesday! We’ve covered IRC for Android, and IRC for IRC for iPad, but it is only fair to to cover Windows Phone 7 as well! A small app calling itself IRC7, or IRC Free on the Windows Phone Marketplace, is an excellent choice for accessing IRC channels from your Windows Phone 7 device.

Not only is it one of the few (maybe only?) free IRC apps for the Windows Phone, but it’s actually very good. You can save multiple channels, store your credentials for logging on, and easily flip between multiple open connections and channels using the ever-so-simple and by-now-familiar Windows Phone 7 swipe-side-to-side interface. Building on that, it has other nice features like not allowing the phone to fall asleep when it is idle (which is key to not getting disconnected from channels), and supports secure connections to chat rooms!

The app is ad-supported, but developer Adafy has done an excellent job of keeping the ad at the edges of the screen and it doesn’t bug you non-stop! Also, the phone supports portrait and landscape modes and will switch on the fly. I love the widescreen support, it looks much nicer and allows me to use the slideout keyboard of my HTC Arrive. I enjoy IRC Free, and encourage you to give it a download if you’re a WP7 user like me!