Yup. Parry Gripp is at it again. I’ve always enjoyed him with the band Nerf Herder

, and I almost died laughing when he put out a short, ADD-fueled song about waffles. But Neon Pegasus? This is a whole new level.

Yup. I did it. I bit the bullet on Kickstarter and pre-ordered an Ouya. And I’m glad I did. If you haven’t heard of it, you will, soon. I’ll describe what I’m talking about soon, but first, just know that I’m in the company of, oh, I dunno… tens of thousands of others. Listen, I’m writing this post early, because my mind is blown – so to tell you this: this post will appear July 13th 2012 at 0600 Eastern time. I’m writing at 2000 July 11th. At the time I’m writing, the Ouya has 27,615 “backers.” 3.5+ Million dollars. When I ordered it was over $1.5 Million. Their goal was only $900,000, which they raised in about a day. I’m glad I got in when I did, because the company is still trying to figure out what they’re going to do with all of their money, and just how many Ouya units they can produce!

So, what the heck is Ouya? I didn’t even watch the whole video or read the whole description when I jumped on it. If nothing else, it’s going to have some VERY nice features, but at its core, the Ouya is a new form of gaming console. It sound like it should be quite powerful, it will run Android, so there is a good possibility you should have direct access to a lot of pre-existing apps, and, one more small thing: the games? They’ll be free. It makes no sense to me, either – it’s the kind of thing that is going to turn the industry upside down… I don’t have any more details than anyone else, right now, but it sounds like they are planning a freemium model which will lead to in-app purchases and unlockables. I’m not entirely sure how I feel about this – I certainly hope it isn’t an entire console of Zynga and Facebook games… but I noticed in the video a few key phrases, such as “free to try.” This sounds very similar to the Xbox Live or Windows Phone model, where everything is required to have a trial version, but I think that is one of the things that made the Xbox Live Arcade and Xbox Marketplace such a huge success. I know I certainly wouldn’t have purchased even half of the games I have in my Xbox Live Arcade collection were it not for the demo versions available to me.

The Kickstarter questions at the bottom of the page confirm my theory, when it states that: “For gamers, every game will be free to play: what this means is that there will at least be a free demo, or you’ll be able to play the entirety of the game for free but may have access to additional items, upgrades, or other features that come at a cost.” Which is fine by me, although I’m sure some people will pipe up down the road and wonder why games aren’t 100% free. By the time you read this, they’ll probably be sold out of all of the reasonably priced (sub $200) Kickstarter options (I got in at $99), but you can check Ouya’s Kickstarter page and see if you’re interested in the first new “gaming console” since the OnLive console appeared to polite applause a few years ago. 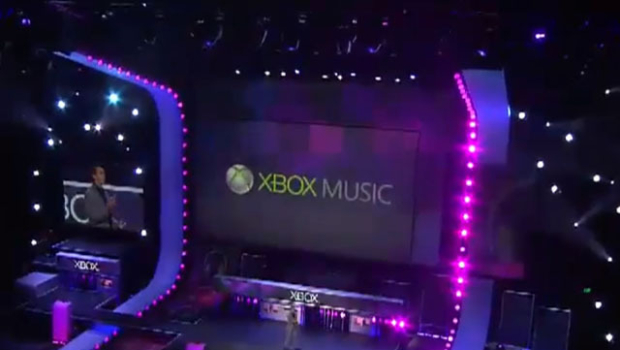 With the coming rebranding of the Zune marketplace to “Xbox Music,” am inclined to wonder if this will lead to even more cross promotion on the Xbox Live Marketplace.  Microsoft has been extremely good to the members of the Zune marketplace on Xbox Live by having weekly deals and discounts highlighted on the dashboard, and featuring artists and contests that could allow you to play a game or two with celebrities.  But what more would I hope to see?  A little bit of gamer-goodies. END_OF_DOCUMENT_TOKEN_TO_BE_REPLACED

AndChat is a free IRC app for Android that works astonishingly well. You can save multiple connections to connect to different servers, save credentials to speed up the IDENTIFY process, chat logging, and it gives you a nice clean chat interface while talking with people. It even features a widescreen mode! 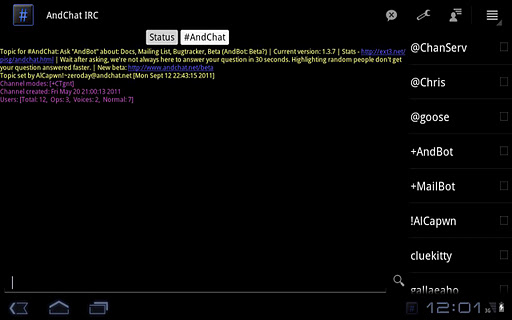 The free product is full featured, and there is a ~$3.25 donate version of AndChat available, or you can donate your own amount of your own at